Here's another one of Allah's little helpers in desperate need of maximum possible sentence. 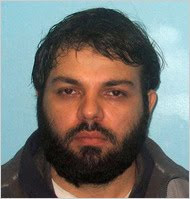 (NY1) One of the suspects accused of conspiring to bomb city subways last year has plead guilty to terrorism charges.

According to the Associated Press, Ahmedzay admitted to conspiracy to use weapons of destruction and providing material support a terrorist organization.

A one-time classmate of admitted terror plotter Najibullah Zazi, Ahmedzay is accused of making false statements to the FBI about Zazi's plan to attack the subways around the anniversary of the September 11th attacks.

He had pled not guilty to those charges.

Ahmad Afzali, a Queens imam who pleaded guilty to lying to authorities in the case, was recently ordered to leave the country.

Zazi has pleaded guilty, and is expected to receive a life sentence at his sentencing in June.

Even though, Ahmedzay admitted to "conspiracy to use weapons of destruction" against Americans, he warned that he is not real enemy. The real enemy of America, according to him, are... "Zionist Jews":(NY Post) A city cab driver who the feds claim plotted with a self-confessed al-Qaeda terrorist to unleash an attack on the subway system pleaded guilty today to terrorism charges -- then went on a rant against "Zionist Jews" for trying to destroy this country.

Zarein Ahmedzay appeared in Brooklyn federal court and told a judge that he received orders from al-Qaeda leaders to carry out the botched plot last September to bomb several Manhattan subway lines.

"Your honor, I strongly urge the American people to stop supporting the war against Islam. It would be in their interest," warned Ahmedzay. "I am thankful for myself that I did not do anything to harm anyone, but I fear someone else might." [...]

During his court appearance, Ahmedzay continued his tirade, saying the "real enemy of this country are the ones destroying the country from within ... I believe it's a special group, Zionist Jews, who want a permanent shadow government."