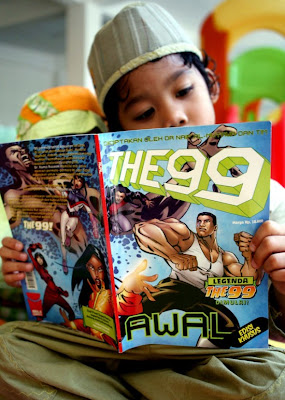 I just LOVE the smell of taqiyya in the morning, don't you?

Washington (CNN) -- Kuwaiti publisher Naif al-Mutawa is having a week even his comic book superheroes might envy.

On Monday, President Obama singled him out for special praise for promoting international understanding with his "The 99" comics.

"His comic books have captured the imagination of so many young people with superheroes who embody the teachings and tolerance of Islam," Obama said.

And on Tuesday, Mutawa was treated like a rock star at the president's Summit on Entrepreneurship, with people lining up to get his flashy, superhero-embossed business cards and polite words of encouragement.

The summit, a couple of blocks from the White House, is a follow-up to a speech in Egypt in June 2009 in which Obama sought to reach out to the Muslim world and offer specific help, mentoring and investment -- and try to polish the U.S. image. Scores of business experts and wannabe entrepreneurs traveled to Washington from the Middle East, Indonesia and other Muslim-majority regions.

The September 11, 2001, terror attacks inspired Mutawa to find a way to change what he worried were dangerous exaggerations and misperceptions about mainstream Islam.

They succeed only if they work together.

There is no religion in the story line, Mutawa said, but he studied the Quran to find archetypes -- what he calls basic human values like trust and generosity -- that he weaves into the dramas.

"We've gone back to the same places that other people have pulled out negative messages and in their place put positive, multicultural, fun messages," Mutawa said.

Mutawa, who has multiple advanced degrees from U.S. universities and worked as a clinical psychologist in New York, spends time in both the United States and Kuwait. He describes himself as "a part-time New Yorker" with lots of back and forth.

"I wanted to build something that made a difference," he said about what inspired the comics. "I also have five boys, and I wanted to make a living."

Mutawa said the comics explore shared values more than individual religious experiences and create what he calls "an alternative universe where kids feel glad where they are."

The comics are printed in eight languages, including Arabic and English, and are for sale across the Middle East as well as China, India and the United States.

"The 99" can be found online and already has spun off a theme park in Kuwait. Mutawa said he is about ready to announce the U.S. release of an animated version, with word expected soon from a well-known American distributor.

"They are all heroes, they work together to make the world a better place, and that's the way it should be."

Mutawa said he "melted into his seat and felt I couldn't move" when Obama said his name. "I was very proud. I was also very humbled."

A recent issue of "The 99" is set in the Philippines, where an international relief agency is under attack by Death Merchant. With plenty of action -- and blazing color and "THWOOM" and "KA-POW" -- the superheroes fight the bad guys and also talk up contemplation, spiritual growth and even the importance of mathematics. In his "Naif's Notes" at the end of the comic, Mutawa drives home his teamwork message.

"Working together is the ultimate key to success for each member of the 99," Mutawa writes. "However, like us, the members of the 99 need to be constantly reminded of this lesson. ... When people work with and help each other, the world is always a better place."

The White House seems to be keeping up with "The 99."

"After my speech in Cairo, he [Mutawa] had a similar idea," Obama said Monday. "So in his comic books, Superman and Batman reached out to their Muslim counterparts. And I hear they are making progress."

BareNakedIslam has videos up of testimony of the kids who survived the Beslan massacre by MUSLIM "HEROES". Maybe Naif would like to make a comic book out of THAT.

Where's Bosch, I'd love to hear his take on this repulseve Naif crap.

But you have to go check out the Indian-Pakistani border guard ceremony vid at Ace of Spades. Don't ask. Just go.

RRA, the border guard video is a hoot. IMHO, while the uniformed ones are busy with their show of cocksmanship they can't be busy with jihad. Hope it's a time consuming daily endeavor.