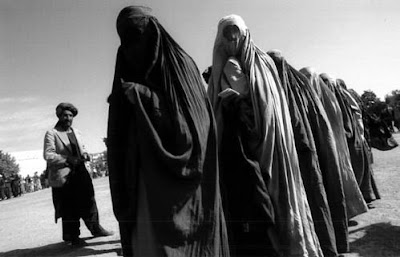 Muslim men can marry up to four women as long as they can properly provide for them. Yet, the divine// muslim prophet had, let's see . . .

1.Khadija Bint Khuwailid
2.Sawda Bint Zam`a
3.A´isha Bint Abu Bakr
4.Hafsa Bint `Umar
5.Zainab Bint Khuzaima (half sister of Barra)last woman the prophet married due to the restriction imposed on him by Allah (33:50, 33:52).
6.Ummu Salama/Umm Habiba
7.Zainab Bint Jahsh
8.Juwairiyya (Maimunah or Barra) Bint al-Harith married her when he was 60 and she was 36 in 629 A.D
9.Ummu Habiba
10. Maimuna Bint al-Harith

. . .not to mention the assortment of concubines, female slaves, possessions of ol' Mo's right hand

i.e. Rayhana Bint Zaid,a Jewish girl of extreme beauty who refused to convert to Islam - one of the spoils of war from the tribe of the Banu Qurayza,

Safiyya Bint Huyay (Hayay?) 17 year old newlywed/widow/orphan thanks to Mo, taken a captive after the slaughter in Khybar --

all to satiate this supposed prophet's personal lusts which get worse the more you read the, um, 'holy books' .

Muhammad wanted to marry a crawling baby. This is from the book of Sira by Ibn Ishak, the most authentic biographer of Muhammad. Most other biographies are based on this monumental work by Ibn Ishak/Ibn Hisham

(Suhayli, ii.79: In the riwaya of Yunus I.I recorded that But the apostle saw her (Ummu’l-Fadl) when she was baby crawling before him and said, ‘If she grows up and I am still alive I will marry her.’ he died before she grew up and Sufyan b. al-Aswad b. Abdu’l-Asad al-Makhzumi married her and she bore him Rizq and Lubaba….(Ref.3, page 311)

Wholesome or vile? Islam is such a pathetic vile set of contradictions by pathetic vile prophet Muhammad, uswa hasana, al-insan al-kamil.
Posted by Pastorius at 4:43:00 pm

more details in this article