How Could They Laugh? 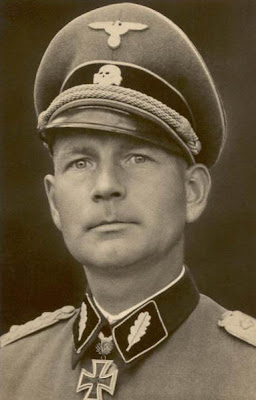 Oh, please forgive me. I meant to say, he was a Human Being.

But, some of these human Nazis, uh, Human Beings are "moderates"; moderate Nazis, uh, I don't know ...

I get the principle that we need to separate the "moderates" from the bad guys, but we also need to be clear that the "moderates" are still identifying themselves as being a part of a Nazi ideology which they are not willing to condemn for what it is.

If the "moderates" want to get rid of the quotation marks, and become real Moderates, then I would suggest they condemn the specific principles of Islam which make it a Nazi ideology.

2) condemn anti-Semitism and anti-Zionism in general (for after all, Zionism is merely the idea that Jews ought to have a homeland

3) condemn the murder of apostates, gays, and adulterers under Sharia

4) condemn the burqa and niqab for what they are, the chains of modern female slavery, and condemn the second-class citizenship of women under Islam

5) condemn the institution of slavery altogether, for truthfully, people are enslaved the world over, according to the rules of Islam (think Sudan, and the enslavement of Filipino maids and workers in Saudi Arabia)

If "moderates" are not willing to condemn these things, then they are not truly Moderates.

And Dag is right, such people will, eventually, fall into the Propellers
Posted by Pastorius at 2:11:00 pm

May I add, 6)condemning of proselytism by the sword and conquest of the world by force.

Unfortunately I'm betting they're almost all headed for the propellers as are their collaborators and exculpators.

A third angel followed them and said in a loud voice: "If anyone worships the beast and his image and receives his mark on the forehead or on the hand, he too, will drink of the wine of God's fury, which has been poured full strength into the cup of his wrath. He will be tormented with burning sulfur in the presence of the holy angels and of the Lamb. And the smoke of their torment rises for ever and ever. There is no rest day or night for those who worship the beast and his image, or for anyone who receives the mark of his name." REVELATION 14, Verses 9 through 11.

The book of Revelation is making more sense every day, isn't it?

This passage is interesting:

Great brother, I almost didn't post my comment because I don't want to turn off those great people among us who are secular, but I thought that maybe it might cause some to consider my point of view. I really don't want to be thought of as some religious nut, but these great folks here deserve to at least hear something, ya think???
Because IMO when these horrendous predictions come to pass as they most certainly will, some of these quality beings (I mean that most sincerely) may remember these words and be saved.

One thing most remarkable about the recent dialogue we've had with Abdooss is the quality of his education: It exceeds the Puccini heroine's "Eight dollars of education," as cited in "Girl of the Golden West" by, oh, I dunno, maybe a million bucks or more. His formal English is letter perfect, something most Americans can't pull off after years of university training and work in the world. [Note to self: proofread before publishing this.]

What we saw in Abdu is not a "moderate" Muslim" but a young and educated fellow who has the benefit of a Western education in a Muslim land. He's bright enough, but he has no idea of Islam, it not having been taught at his institution. He came here to learn about Islam. He's not, therefore, and according to me, a "Muslim"; he's a Westerner who thinks he's a Muslim.

I suspect there are many nominal Muslims who have no more idea of Islam than Abdu has, and he's well educated. The point is to make sure he understands, before he's grabbed by jihadis and twisted into a monster himself, that Islam is not some pretty thing like himself, but it is a dangerous and evil thing to be sucked into at ones ultimate peril. It has a cost that one must avoid. Not pretty, not flattering to a young man, not a happy thing to say to a nice young guy. It hurts, but better that than having, most likely, his own kill him for lacking purity. Better he see the evil of it and back away before it's too late. And in continued Modernity he has a chance to live a right life. Being a "moderate" Nazi, as per above, is to be a Nazi. It's no good. One must choose, even if it hurts to leave ones own behind.

We might be shocked to learn that Auschwitz was originally created as a model city for expansionist Nazi Germany, a pretty place for show-casing the nation's aspirations. A pretty place, but not far from the gardenias, the Death Camps.

No, it is never OK to be a Nazi, no matter how "moderate." One must choose.

It WAS a showcase for a nazi city, Dag.

Industrialized murder and slavery based on heritage.

Sort of like slightly exaggerated version of the dhimmi

I think of the Apocalypse as those moments one might experience while looking in the mirror of a morning.

Dag,
You said; He's not, therefore, and according to me, a "Muslim"; he's a Westerner who thinks he's a Muslim.

I suspect there are many nominal Muslims who have no more idea of Islam than Abdu has, and he's well educated. The point is to make sure he understands, before he's grabbed by jihadis and twisted into a monster himself, that Islam is not some pretty thing like himself, but it is a dangerous and evil thing to be sucked into at ones ultimate peril.


I ask: Good observation. I agree.

cjk,
You said: I almost didn't post my comment because I don't want to turn off those great people among us who are secular


I say: Yeah, I think about that a lot. Once in awhile I choose to add in some thoughts about the Bible, Prophecy, or demonology - as is the case when I tell people I think Allah is, quite literally, MOLOCH - the flesheating god the Canaanites worshiped.

It's gotta be almost impossible for anyone to swallow that one. Even other Christians.

But, I do it anyway. I'm sure I lose a lot of "credibility".

I'm also sure I don't have that much to start with.

Dag,
You haven't answered this Question yet;
1)Were you talking about killing all Muslims or just the Jihadis?

2)Or were you waiting for the Jihadis to kill all other (moderate) Muslims (and all (moderate) Infidels) and then only will you engage the Jihadis in combat? (less work this time)

Abdu, I think I've made it clear so far that I don't have any personal animus toward "Muslims" per se; however, when I think about the so-called moderate Muslim, and knowing what I do about Humanness, regardless of how limited that is across the possible continuum, I have to wonder about the moderate Muslim: Where will he stand at dawn when the jihadis say the day before, "We attack Chios at dusk."

Most good men will simply fall in, bravado having had its day in the comfort of security and the gathering of the like-minded. when the whip comes down and the heel presses, then we find that most moralists, like those in the story by Hassel, like the story told by Rene Girard concerning the disciples and the modern hero, are simply shuffled off by the powers that be, morality crumbling into practicality, however ignoble in the mind.

You, as a Modernist, will have to choose long before the heel grinds, or your lack of choice will be the choice, and you will be devoured by whichever side you hang with, war being impersonal in spite of your high good qualities and moral standing.

do I distinguish between jihadis and the innocent by-stander? No, sport, I do not. Another literary allusion, if I may, this from Norman Mailer, The Naked and the Dead, set on an island in the Pacific during the war against Japan, in which the scene finds two Jews in foxhole discussing the Nazi-led genocide:

"When they come for you they won't ask what kind of Jew you are," says the other.

Yes, I will die, all human being will die eventually.

But,
Why can't Dag answer a simple Question and not turn it into another dissertation?
I wasn't asking which you hated more.

My question is; Do you plan to kill all Muslims? Yes or No?