Why The Fuck Do Muslims Need Another Fucking Mosque In New York City Anyway? 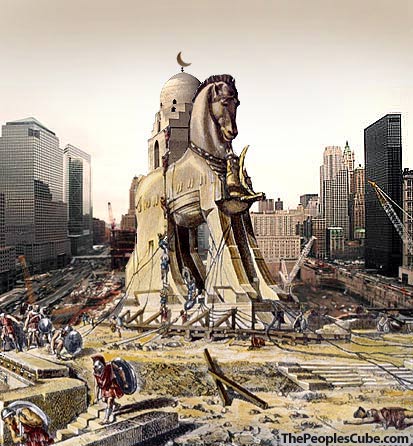 
Places of Pisslamic Warship in NYC

There are actually 77 synagogues, but this has been three centuries in the making! Compare that to over 100 pisslamic places of warship in two decades!

If the larger Jewish population in NYC can worship with 77 synagogues, why does the smaller (albeit, not for long) moooslem population have to have more than 100 places of warship already?

Somewhere, I forget where, someone brought up the fact that the Ground Zero neighborhood isn't even a moooslem neighborhood, so why the need for a pisslamic place of warship there?
Posted by Pastorius at 2:27:00 am

Because Muslims are so active in trading stocks on Wallstreet and also occupy other high income jobs in that area./sarc

Their aggressivity in opening so many pisslamic places of warship in NYC for such a small population definitely is worth questioning.

And I'm loving your cockiness as of late!

"Places of warship" . . .awesome parody! I am so stealing that!

As to your question, "If the larger Jewish population in NYC can worship with 77 synagogues, why does the smaller (albeit, not for long) moooslem population have to have more than 100 places of warship already?"

Seems the WON is determined to build bridges with the Muslim ME and Senator john Kerry is introducing a three-year pilot program to draw such workers from 4-7 Muslim-majority countries to be picked by the US State Department.

It's yours! I refuse to use their words, cringe when I hear people say things like "jihad." I encourage the use of the more accurate and correct English word: "holy war." The more we use their words, the more they become part of the American lexicon. Been wanting to write an essay on it for some time, but I never gots the time! Soon, hopefully!

Over at JihadWatch dumbledores army posted the link to this 2006 post about mosques at pedestrian infidel: http://pedestrianinfidel.blogspot.com/2006/02/inside-the-forbidden-fortress.html

More first-hand accounts of what actually goes on in mosques would be invaluable at this point.

RRA,
Thanks for that link. I'm going to use over the weekend, I think.

Build a masjid. Need to build so that more more people pray Allah and see the beautiy of Islam. Muslims did not cause havoc that it was the devil. We need more Masjids to keep the devil away!