UK: "Anarchists" Riot Because Government Won't Give Them More Anymore

An Anarchist is defined as "a person who advocates the abolition of government".

But you know things are strange, indeed, when Anarchists are angry because governments are cutting back.

This, from Stogie, describes the situation well: 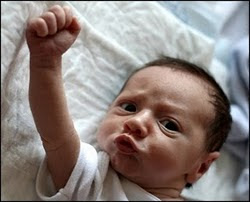 Fight The Power
I believe it was The Other McCain who noted that the left's sense of entitlement is now so pronounced that it represents a lethal threat.  He was talking about Wisconsin, but now the massive temper tantrum over free money has reached London.  British freeloaders, suddenly cut off from the mother's milk of socialism, are rioting there at half a million strong, smashing office windows, defacing buildings and attacking police.

Governments trying to restore fiscal solvency are like parents with spoiled children.  If the parents don't give in to every whimsical demand of their over aged, selfish brats, they run the risk of violence.  Their spoiled children may smash the house and even beat up the parents.

Forgive me for saying so, but I think that this is an over-simplified take on what is a rather more complex problem. There is an element of truth in it, of course. But we cannot airbrush people's anger out of the equation: anger with the bankers for paying themselves totally unjustified, unrealistic bonuses when others are hurting so badly.

Britain has become a very polarised society; and Mrs. Thatcher, I'm sorry to say, has a great deal to answer for. After all, it was she who deregulated the banks in the first place, and thereby made way for this money-grab at the top.

At the time, I was a great fan of Maggie. But she went too far, and paved the way for this polarised society we now have.

But yes, I agree with you that excessive hand-outs have been given to certain people, often in the hope of buying votes. It's a Labour Party ploy. What has once been given to someone is always difficult to take away.

Please read my take on the anarchy we witnessed yesterday in London.