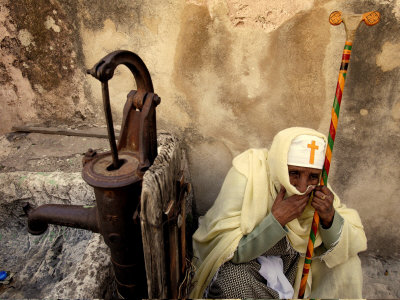 Thousands of Christians have been forced to flee their homes in Western Ethiopia after Muslim extremists set fire to roughly 50 churches and dozens of Christian homes.

At least one Christian has been killed, many more have been injured and anywhere from 3,000 to 10,000 have been displaced in the attacks that began March 2 after a Christian in the community of Asendabo was accused of desecrating the Koran.

The violence escalated to the point that federal police forces sent to the area two weeks ago were initially overwhelmed by the mobs. Government spokesman Shimelis Kemal told Voice of America police reinforcements had since restored order and 130 suspects had been arrested and charged with instigating religious hatred and violence.

Prime Minister Meles Zenawi said the Islamist group Kawarja is believed to have incited the violence.

"We believe there are elements of the Kawarja sect and other extremists who have been preaching religious intolerance in the area,” he said at a Saturday press conference. “In previous times, we have cracked down on Kawarja because they were involved in violence. Since then they have changed their tactics and they have been able to camouflage their activities through legal channels."

The string of attacks comes on the heels of several reports of growing anti-Christian tension and violence around the country where Muslims make up roughly one-third of the total population but more than 90 percent of the population in certain areas, 2007 Census data shows.
One of those areas is Besheno where, on November 9, all the Christians in the city woke up to find notes on their doors warning them to convert to Islam, leave the city or face death, a Christian from Besheno told FoxNews.com on condition of anonymity.
“Under the Ethiopian constitution we are supposed to have freedom of religion, but Muslim leaders in our town don’t allow us that right,” the source said.
Later that month three Christians in Besheno were assaulted in religiously-motivated attacks and three others were forced to flee the city after being told that Muslim leaders had commissioned hit men to kill them, one of the exiled Christians told FoxNews.com.
“We were told by some Muslims that live in the city that there was already a plan to kill us and that the people who were assigned to kill us had already come from another city to do it.”

“In previous times, we have cracked down on Kawarja because they were involved in violence. Since then they have changed their tactics and they have been able to camouflage their activities through legal channels."

Very important that people understand this aspect of Mohammedan behavior. When facing superior strength and WILL, they will always appear less violent than they really are. FACT. Patient as snakes.

As a coptic Ethiopian i am soo touched that a white boy from Amerikkka is so worried about us negroes in our poverty stricken "shit hole" country(as white boys love to tell us) .
Very touching.We copts are not infidels by the way.You people are.we don't have a problem with muslims the problem lies with the pentecostals/evangelical patrobertsonstan Jim falwelstan nazistan white religion.(that is a foreign religion. 1luv.

Exactly, the Muslims are only killing you because of white people.

And, we white people planned it that way.

Too bad we control your lives like that. And, we always will.

I don't buy your act for a second, fool. You know why? Cuz, I'm a leftie, and before I ever got interested in this subject, I talked to Ethiopian Christians who explained the situation with Islam in Ethiopia. Being the leftie that I am, I was shocked. After awhile, I had to come to my senses and accept reality, which is something very few of my leftie friends ever do.

So, go back to your life of being controlled by white people like me.