Obamacare Supporter Anthony Weiner Wants Waiver For New York City, So "the city can have more contrlol over it's destiny" 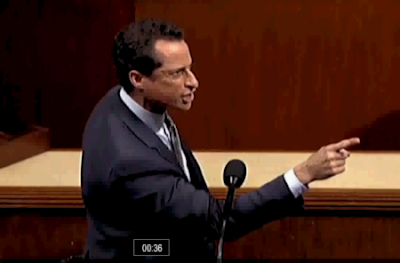 Imagine that, they want control over their destiny.

Well so do We the People. Idiot.

Rep. Anthony Weiner said Wednesday he was looking into how a health law waiver might work for New York City.

Weiner, who is likely to run for mayor of New York, said that because of the city’s special health care infrastructure, his office was looking into alternatives that might make more sense. Weiner is one of the health care law’s biggest supporters; during the debate leading up to reform, he was one of the last holdouts in Congress for the public option.

The congressman was trying to debunk Republican “myths” about the health care law during a speech at the Center for American Progress. He used the waivers as way to describe how flexible the law actually is and how “this notion that the government is shoving the bill down people’s throats” is not true.

“The administration needs to make this argument more forcefully,” he said. “A lot of people who got waivers were … people who are our friends.”

“We in New York already have hospitals, we already employ doctors and we employ nurses. We have a lot of uninsured people. … [Setting up] the exchanges is the one piece of the puzzle that would be difficult for us to do,” he said. “I’m just looking internally to whether the city can save money and have more control over its own destiny."