What Joe Sacco wrote/drew about Hebron a decade ago

While doing some more research on the awfulness of cartoonist and so-called graphic novelist Joe Sacco, I first came upon an interesting blog called Jewish Comics, where the blogmaster, Steven Bergson, provides news on comics related items involving Jews and Judaism. And I also found he had an extra blog called Israel & Israelis in Comix, that may just be a simpler blog not meant to be updated on a regular basis, but still has some info worth noting. And one of the items I found on the latter was about 2 of Sacco's cunningly crafted anti-Israel smears that he drew nearly a decade ago for 2 propaganda papers. I'm going to first post the panel provided coming from Time in March 12, 2001: 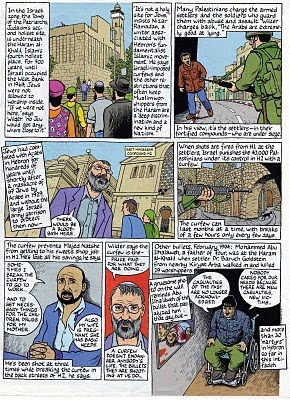 Though he mentions the 1929 bloodbath that the Mufti in Jerusalem incited with British cooperation and Muslims in Hebron perpetrated against the Jewish community, and which the British forces in the area allowed, he does not actually present any pictures here alluding to that, and seems more intent on alluding to the supposed cruelty the Israelis foist upon the "poor palestinians". The way he refers to the Tomb of Patriarchs being "underneath" the supposed Haram al-Khalil, obfuscates how Abraham originally bought the land as a burial site for his wife Sarah, and King Herod was the one who had the main structure built centuries later.

This article tells something about the Goldstein case that Sacco doesn't, and wasn't revealed for a long time either:

Other elements of the picture that Rabbi Dr. Simons informs us about include that the metal detector at the East Gate, where most of the Arabs entered that Friday Purim morning, was damaged the night before. An unusually large number of Arabs came to the Machpela that Friday - some 500 men and 300 women. Only a handful of the men were searched, and not one of the women. After the Goldstein incident, three automatic weapons were found in the Machpela - other than Goldstein's weapon - including one wrapped in an Arab keffiya (headdress). All these elements point to a planned attack on the Jews at the Cave of Machpela that Purim morning.

Is it possible this was a set-up or something?

Then, there's the following panel published in the NYT magazine, July 3, 2003. 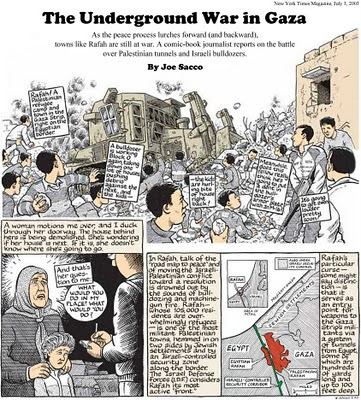 And here, he again does his smear routine against Israel as the aggressor against the Gaza strip.

Speaking as someone who served in the army himself when he was 19-21 years old, I figure that could include me too, even though I never served in a combat unit (I was only in a supplies job).

Sacco is a most truly reprehensible man, and this only reinforces the perception that he's not interested in objectivity. What makes me really disgusted here is how he discriminated against the Jewish residents in the most ancient Jewish city that, while it's long been surpassed by Jerusalem as the number one holy city, is still a very famous and vital landmark nevertheless.
Posted by Avi Green at 8:30:00 pm

One of the major weapons in this propaganda war against Israel is the “Remember these Children” website which compares the numbers of Arab children who have been killed in the conflicts to the number of Jewish children murdered by terrorists. The Arab list totals 1,437 since 2000 and the Jewish list totals 130. Not withstanding that such reporting is unsubstantiated, After visiting the site, I noticed that according to this report, most of the Israeli children were murdered in drive by shootings and human bombs exploding themselves in restaurants, buses and markets. In other words, the Arab terrorists targeted those children and murdered them in cold blood. For all of the Arab children, on the other hand, the site identifies the causes of death as gun shot wounds or explosions during the firefights with Arab Hamas fighters. What were their children doing in the middle of a war zone? That is clear and convincing evidence that the Hamas thugs where using the local children as human shields. Soldiers are trained to return fire when fired upon. The bushwhacking urban guerrillas who fire at enemy troops from a neighborhood full of children are the ones causing the deaths of those children. More at http:moshesharon.worpress.com