Breaking: Yonathan Melaku May Be Linked To Shootings 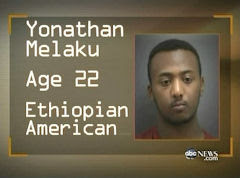 D.C. locals who have been following the story of Yonathan Melaku are not surprised to hear that he may well have been up to other mischief besides hiding out in Arlington National Cemetery, within walking distance of the Pentagon, United States military headquarters.

The man detained in connection with a scare at the Pentagon Friday morning may be linked to last fall's shooting at various military targets around northern Virginia.

Four targets were shot at last fall, including the National Museum of the Marine Corps in Triangle twice, along with a Coast Guard recruiting station at the Potomac Mills mall, a Marine Corps recruitment center in Chantilly and the Pentagon.

No one was hurt in the October shootings.

Melaku, a naturalized citizen originally from Ethiopia, has not been charged with any crimes and officials say he acted alone. He is being held in U.S. Park Police custody.

Note the headline of the above article: "Pentagon scare suspect may be linked to shootings." Any attempt that doesn't take lives is a "scare," not a terror attack or an attempted terror attack. "No incendiary device was found."

We local to the D.C. area no longer hear about the pro-Al Qaeda materials Melaku was carrying in his backpack, let alone that this "naturalized citizen originally from Ethiopia" was, at one point, determined to be a Muslim. Is he a Muslim? Well, if he is, the mainstream media won't say so now.

This related material also points out that the mainstream media didn't want to mention that the 2009 Fort Hood shooter Malik Nidal Hasan was a Muslim and had been spouting jihad for quite some time before he starting killing fellow servicemen.
Posted by Always On Watch at 10:18:00 pm

Fort Worth Star-Telegram indicates Melaku is tied to the 2010 shootings through ballistics evidence.
"The shootings last year, all done with the same gun, did not injure anyone. . .
The shootings started Oct. 17 at National Museum of the Marine Corps in Triangle, about 30 miles south of Washington. Days later, the Pentagon was hit. Then, the shooter targeted a Marine Corps recruiting station in Chantilly before again firing on the museum. The fifth shooting was discovered at a Coast Guard recruiting station near a sprawling outlet mall in Woodbridge. The buildings were within 40 miles of each other.. .
Spokesman Lt. Col. Francis Piccoli said Wednesday the Marine Corps was in the process of trying to remove him from the service based on the grand larceny charges. Melaku has not tried to contest his removal, Piccoli said." link
*********
According to Marine Corps records, Melaku is a MUSLIM.link via FoxNews

Also not addressed sufficiently was the issue of multiple suspects on the run:
Quote: "A "suspicious device" was found in the car, according to NBC News Pentagon correspondent Jim Miklaszewski. Police were searching for one, possibly two more people who fled the scene on foot when police stopped the vehicle, Miklaszewski reported." link

Melaku made his court appearance Monday via a video hookup from the Loudoun County jail, where he was in handcuffs and an orange jumpsuit. The larcenies for which he was charged allegedly occurred on May 26, and are in addition to four other larceny charges previously filed against him."

Ali A. Mohamed. Mohamed, a major in the Egyptian army, immigrated to the U.S. in 1986 and joined the U.S. Army while a resident alien. This despite being on a State Department terrorist watch list before securing his visa. An avowed Islamist, he taught classes on Muslim culture to U.S. Special Forces at Fort Bragg, N.C., and obtained classified military documents. He was granted U.S. citizenship over the objections of the CIA.

A former classmate, Jason T. Fogg, recalled that Mohamed was openly critical of the American military. “To be in the U.S. military and have so much hate toward the U.S. was odd. He never referred to America as his country.”

Soon after he was honorably discharged from the Army in 1989, Mohamed hooked up with Osama bin Laden as an escort, trainer, bagman and messenger. Mohamed used his U.S. passport to conduct surveillance at the U.S. Embassy in Nairobi; he later pled guilty to conspiring with bin Laden to “attack any Western target in the Middle East” and admitted his role in the 1998 African embassy bombings that killed more than 200 people, including a dozen Americans.

At the 30 second mark of this Fox News video report [aired Friday last week], it is disclosed that Melaku was upset he couldn’t find work, having expressed difficulty in obtaining the appropriate license (on waiting list) for driving his father’s cab.

However, in an earlier 5pm MyFoxDC video report [same link has all earlier video reports],Reporter Paul Wagner (Alexandria Section of Fairfax) states @ about the 3:30 mark:

We have noticed them [FBI] going into some of the cars that are parked here. You can’t see them, but just on the other side of that tent there are three vehicles including a taxi cab and the taxi cab is parked inside the garage. Neighbors tell us that they have seen Melaku driving that taxi cab.”

Melaku served as a motor vehicle operator for the Marine Reserve.