Islam is a religion of peace and love, so every time I hear someone comparing Islam to 9/11, it makes me want to change people’s perspective of what they think Islam is, because what happened that day is exactly what Islam isn’t.

(Laughs.) The next sentence, again, shows that the idiot is living in fantasy land:


It’s really unfortunate that the media seems to be deliberately trying to make Muslims look bad; nearly all the headlines involving Muslims are negative in nature.

The media goes out of its way to blame whites, Christians, guns, NRA, men, toxic masculinity, etc. Even when an ISIS loving Muslim killed dozens in Florida, the initial narrative was anything but "blame the Muslim".


This is all part of what I believe to be anti-Muslim propaganda, to portray us as the enemy. It’s widely believed that the Department of Homeland Security was created after the 9/11 attacks in an effort to keep out Arab and Muslim populations.


The invasion of Afghanistan was also used as propaganda to convince the American people that Osama Bin Laden was somewhere out there in Central Asia, and whoever hid him (the entirety of the Afghan population) was to pay for it.

That's why America carpet nuked Afghanistan on September 12, 2001 because the entirety of the Afghan population was to pay for it. And, of course, invasion!

Is it just taqiya or do these Muslims seriously believe their own horse shit? Well, if you believe that the Procunt Muhammad was the perfect human, then anything is possible.


Even though the media makes Muslims out to be “terrorists” or “threats,” I will always remember that we are not taught to be that way. I’m hopeful that one day other people will learn this too, and people will have compassion towards Islam instead of fear.

The media doesn't make out anything. Muslims who truly follow their evil religion are commanded to be terrorists. That's what they've been doing for centuries. Just take a look at the last 15 years in the USA. 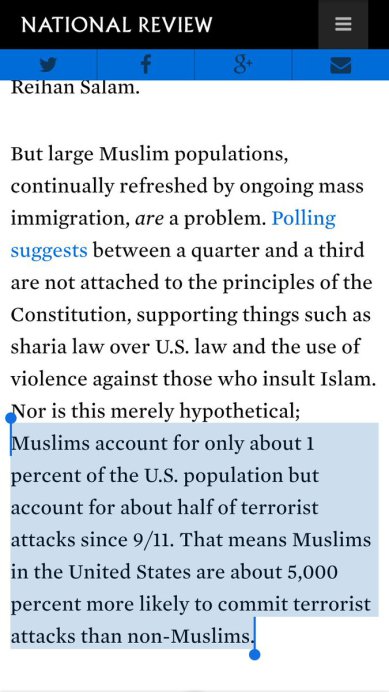 But remember! Islam is a religion of peace. And love. And unicorns.