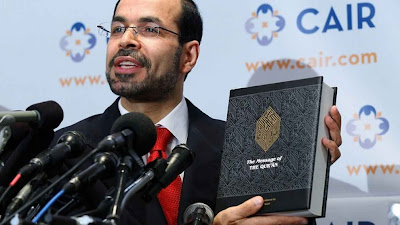 
“There is no evidence that refugees – the most thoroughly vetted of all people entering our nation – are a threat to national security,” said CAIR National Litigation Director Lena F. Masri, Esq.

“This is an order that is based on bigotry, not reality.” “The courts must do what President Trump will not—ensure that our government refrains from segregating people based on their faith,” said Attorney Gadeir Abbas, Esq., who is co-counsel on the lawsuit.

“Our First Amendment is under attack. We, as attorneys, are foot soldiers of the American Constitution and took an oath to protect all from being targeted by the government because of their faith,” said Attorney Shereef Akeel, Esq., who is also co-counsel on the lawsuit.

They are foot soldiers of the American Constitution???

Islam is not a religion. It is a geopolitical gestalt with a dependence on religious fervor to accomplish goals. The opiate of the people is the driver against democracy.

I would support a ban on Christians (my tribe) if we were SanBern, Pulse, or Chattanooga ideologues.

Treat every Islamic entity in the very same way the US Government addresses the mafia. Consider the following:
The Mafia originated in Sicily, some suggest under Islamic rule during 9th-11th centuries. Even today, Northern Italians can sometimes jokingly refer to Sicilians as the “Arabs of Europe”.
* Mafia (or Maffia) is suggestive from the original Sicilian for “swaggering braggadocio”, and likely came from the Arabic word “Mahias” or is a corruption of the Arabic word 'mu afah', in which 'mu' is interpretted as ‘inviolability, strength, vigour,’ and 'afah' something akin “to secure, to protect.’

* “Protection” rackets are run along the same lines as the shariah practice of 'jizyah'.

* there’s the code of “honor” and "vendetta" — as in History Channel's "Omerta: Code of La Cosa Nostra" .

* The code of Omerta is very much like the prohibition against speaking ill of Islam or speaking out against Islamic atrocities by other Muslims.

* the only way out of the Mafia is death (or the Witness Protection Program).

Now compare to this MEMRI translated video clip preset to begin as Egyptian-German Scholar Dr. Hamed Abdel-Samad Analyzes "the Birth Defect of Islam"
and discusses the term, “mafia” :
”A careful comparison teaches us that the birth of the mafia is very similar to the birth of Islam.
The island of Sicily was occupied by the Arabs, and no culture influenced it more than the Arab culture. The Arabs had an impact on the island's agriculture and trade, and introduced the notion of jizya and extortion into southern Italy.
In the mafia, they do not call it jizya. They call it pizzo.
The same notion has existed since the foundation of the Islamic State in Medina: You launch a raid, take booty, and split it, and that was the basis of the economy. You protect a group of people in exchange for protection money. Politically, this is how Islam was established. This is the truth, whether we like it or not.
In the mafia, there is always a division between the capo, who is the boss, and the capo dei capi, the boss of all bosses. The notion of the godfather is very similar to the notion of the Prophet. The godfather is untouchable. You must not criticize him. If you do, you will be killed. If you betray him, you will be killed.
The Mafia considers itself to be a moral organization. When they tell you their history, they say: We united the tribes in Sicily. We restored security and justice, taking from the rich and giving to the poor. This is how they present themselves. They present the mafia as a merciful organization, but, they say, later generations have distorted the image of the mafia, and have used it for criminal purposes. It is the exact same idea as our notion of the inception of Islam.

Since it can be argued that Islam and Islamic jurisprudence is very similar to the more familiar "mafia" rule . . .it is logical to legally approach Islam the same way our government and our laws address the mafia.

So, the executive cannot set immigration policy in a manner consistent with the national interest. This is certainly new need to everyone but CAIR.

Screw CAIR. Kick em out like they're trying to do in Oklahoma

Kill 'em all and let Allah sort them out.

C-CS, There is a good idea, especially with all the hammering odumbo did on Christians.

Would suggest you support the American Freedom Law Center. They are a great group of attorneys committed to the cause of defeating Islamist lawfare. David Yerushalmi and Robert Muise of AFLC and I recently successfully defended our clients in the clockboy defamation case. Please consider supporting their efforts.

I did not know you were part of that, Pete.

Thank you so much for the service you provide. I am a big fan.

Question, how would you suggest I support the AFLC? Any specifics?

Funding is good (and I don't get paid from AFLC. I am in private practice 100% and not on staff anywhere except my firm). Like every organization, AFLC has bills and they go against well funded groups like CAIR and the ACLU. You might also consider linking to the AFLC page.

Emergency hearing on those detained at JFK set for 7:30 Courthouse at Camden Plaza Brooklyn. Showing of strength works.

The NY Taxi Workers Alliance took to their Twitter account on Saturday to announce that they will halt all taxi pick-ups at JFK Airport from 6PM-7PM in solidarity with thousands protesting Trump’s so-called ‘Muslim ban’./

WHY THE PROTEST? Because most of the 50,000 drivers
are MUSLIM and may be next in line for DEPORTATION/ just saying/

If you're not in NYC, head out to the International arrivals at the nearest airport. If u live in a small town, go to where u protest.

A friend of mine WHO IS A LIB/LEFTIE commented, "I feel like I am at war."

My warning to her and her friends:

BE CAREFUL WHAT YOU ASK FOR, HONEY.

The time has come to put a stop to Leftist nonsense.

Quite frankly, if they want to take it to the streets, I am more than happy to meet them with disproportionate force.

The left declared war on America most certainly when LBJ had JFK killed.

Their war efforts clearly have escalated ever since.

Pasto,
A friend of mine WHO IS A LIB/LEFTIE commented, "I feel like I am at war."

During what I've been able to observe during my recuperation -- less blogging means more time to observe -- the Left is indeed in war mode.

It's gonna get worse. Watch for it.

Peter Rowe. You certainly should contact me and open up a line of dialogue with me.

My e mail address is:

The "Muslim ban" claim is #fakenews and people actually need to go through the trouble of reading the Executive Order: http://www.truefreethinker.com/articles/what-does-trump%E2%80%99s-executive-order-immigration-ban-really-say

Pete Rowe- looking for a personal attorney - are you in the LA area- if not- can you suggest someone?--Pasto has my e-mail address-
C-CS

Pete is not in California.

I will reach out to you and Pastorius. I know some guys in L.A. I can put you in touch and you can decide if a good fit.