This photo via Bare Naked Islam: 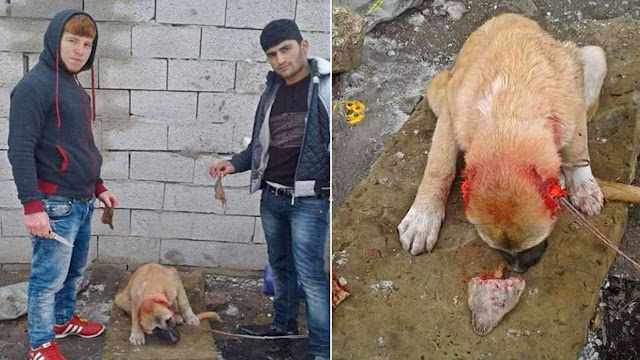 
According to the information published on social media (and confirmed by a local newspaper) the thugs responsible for this monstrosity are Hasan Kuzu (the one of the left) and Neset Yaman (on the right). The two are, most likely, involved in dog fights and decided to punish one of their dogs for losing a battle in the most inhumane way possible. The two proceeded to cut the dog’s ears off with a sharp knife, with no anaesthetic whatsoever. They had a friend record the scene – during the video, which was uploaded online but has since been deleted, the dog howls in despair, begging for mercy, but the cruel attackers just keep on going.

What's amazing is that these monsters put the photos and video online like they did some cool, badass thing that they want to share with the world.

What they did is illegal. Let's see if Turkey is serious about enforcing the laws.
Posted by Isaac Schrödinger at 6:25:00 pm

Perhaps this gives a nod to the Arab custom, as described during the time of M. of cutting off a camel's ears and nose when delivering bad news.

The humanity of a nation can be defined in protections afforded the weak and vulnerable and the manner in which we care for our pets and beasts of burden.

Wish you had not posted this. I might not be able to get the image out of my mind.

Your comment reminded me of a book I read many years ago: The Black Book of Communism.

I could only read it in small portions at a time because the horror stories and the ugly photos would make my stomach churn. Millions of humans were brutalized and broken by the communists. They actually suffered through what a cozy person like me had trouble reading about.

That's the nature of evil. It's painful to look at. One can't even imagine the suffering of those who're at the receiving end of it.

Imagine how fucked up I must be to have done this for 12 years of my life.

Pasto,
Well, you're not alone!