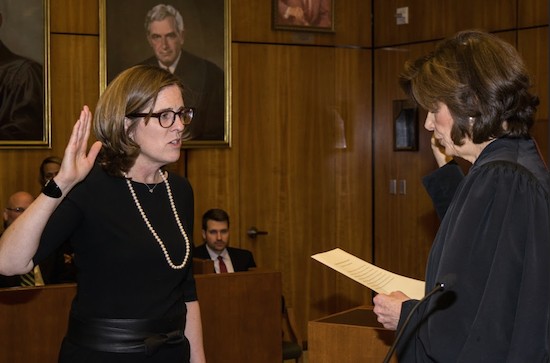 NOT SURE ABOUT THIS INFORMATION:

Something stinks to high heaven with the appointment of this judge. According to the 1/28/2017 BrooklynDailyEagle:


"Judge Ann M. Donnelly was officially sworn in as the 61st judge of the Eastern District of New York during an investiture ceremony at the Roosevelt Courthouse in Downtown Brooklyn on Friday night.". . ."Donnelly was nominated to be a federal judge by President Barack Obama on the recommendation of Sen. Charles Schumer. On Friday, she had the oath of office administered . . ."

The time stamps suggest overt seditious acts by Schumer and Obama - days after Trumps inauguration and within hours of Trump's EO.Note the comments to this linked article are also telling:===>"notonmywatch


donnelly is a horrid judge. i have been on the short end of the stick where donnelly upheld an absurd ruling by another judge (carla craig) where that other judge quoted a repealed statute. she ignored several facts in papers that were inconvenient in her decision. she quoted one line of text in a transcript to bury me when the other side, in the next line in the transcript, admitted that the first line was not true. she use artfully placed misstatements(lies) to make it appear as if she met the minimum standard required by law to keep me from getting oral argument. she promised to address the merits in a motion to reconsider and then did not address the inconvenient points made in the motion. between her and cogan who has the "el chapo" case it is a kafka-esque sideshow of bullies and cheating in the eastern district. you won't drain the swamp till you add up all the malfeasances done to the low profile people."

UPDATE - Apparently the information is true. It is repeated on the Ohio State University Moritz College of Law website.


On November 20, 2014, President Barack Obama nominated Donnelly to serve as a United States District Judge of the United States District Court for the Eastern District of New York, to the seat vacated by Judge Sandra L. Townes, who took senior status on May 1, 2015.[6] Senator Charles Schumer recommended Donnelly for the position.[7] On December 16, 2014, her nomination was returned to the President due to the sine die adjournment of the 113th Congress. On January 7, 2015, President Obama renominated her to the same position.[8] She received a hearing before the United States Senate Judiciary Committee on May 6, 2015.[9] On June 4, 2015 her nomination was reported out of committee by voice vote.[10] On October 20, 2015 the Senate voted 95-2 to confirm Donnelly.[11] She received her judicial commission on October 21, 2015. An investiture ceremony was held on January 22, 2016.[7]

No wonder that Schumer is so confident that he and his cohorts (now, the courts) can blog Trump's policies.

Heads up . . .Front and center on YahooNews: Texas mosque destroyed in early-morning blaze; cause unknown


Hameed Darweesh, The man just released from JFK says he likes Trump on video. @NydiaVelazquez, also on camera...not so sure.

Anonymous,
So, that means this post is incorrect? Is that right?

It wouldn't be surprising.

Will,
IBA's posts will not post to Twitter. I think there's some kind of technological glitch. Epa may know the particulars.

AOW, seems twitter 'qualifies' it as 'Spam' could be you're blacklisted on DNS

http://whatismyipaddress.com/blacklist-check You can ask removal of your URL if listed incorrectly

Thanks for the help, Will. I have sent on your info to Epa.