BRING IT ON, BITCHEZ! Loud Arab Call To Prayer Inside Dallas Fort Worth Airport While Muslims Pray, Chant ‘Allah’ 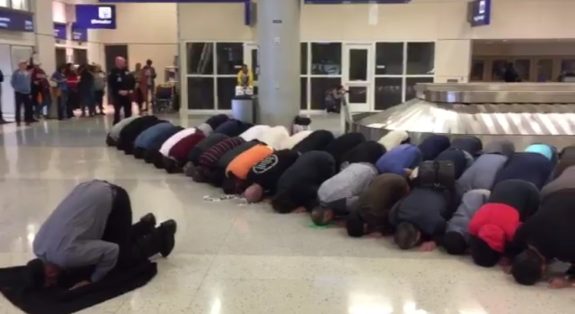 THAT'S HOW YOU GOT TRUMP!

Muslims gathered inside of Dallas Fort Worth Airport with a loud Arab call to prayer in protest of this ban.

This is not a protest. This is how Muslims show their dominance in a country that they are seeking to takeover.

Would any Islamic country allow Christians or Jews to gather in an airport and demonstrate like this?

Had any other group, like the tea party attempted to protest/take over federal property to pray en masse like this, there would have been no hesitation to arrest and investigate every participant.

It was in the baggage area of the Fort Lauderdale airport that a Muslim revert blew the brains out of a poor, old Christian lady.

I like to remember THAT scene regarding Islam and the danger posed by Muslims who seek to terrorize the West.

How do you know Muslims won't allow Jews or Christians do the same in Muslim Countries. You should have knowledge about the demography of Muslim countries, and how safe are religious minorities over there.