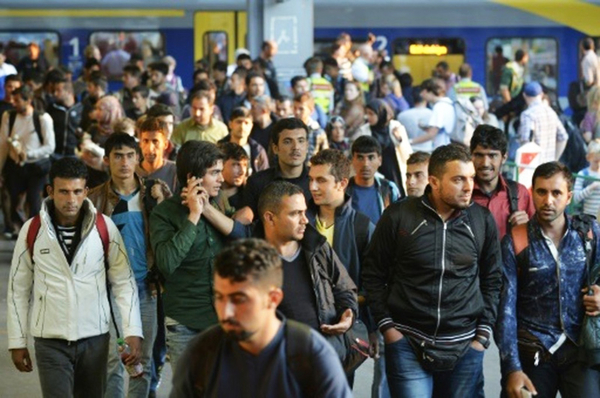 The court’s decision, which will affect people who have been detained in airports, came after the ACLU and other activist groups filed a class action lawsuit on behalf of two Iraqis who were held at John F. Kennedy International Airport in New York as a result of the order.

“I hope Trump enjoys losing. He’s going to lose so much we’re going to get sick and tired of his losing,” ACLU National Political Director Faiz Shakir told Yahoo News shortly after the decision was announced. The White House did not immediately respond to request for comment about the court ruling.

Trump’s executive order, which he signed on Friday afternoon, barred people from Sudan, Syria, Yemen, Iran, Iraq, Libya and Somalia for entering the United States for 90 days. It also stopped all refugees from entering the U.S. for 120 days and indefinitely suspended the entry of refugees from Syria.

As a result of the order, some people with current visas have already been detained or turned around at airports. The class action lawsuit sought an immediate injunction barring the Trump administration from blocking immigrants based on the executive order.

It argued the order violates a 1965 law that banned discrimination in immigration based on national origin.

According to a copy of the court decision from Judge Ann Donnelly it will stop officials from removing individuals with approved refugee applications, holders of valid visas, and people from the affected countries who have been authorized to enter — pending completion of a hearing on the matter in the court.

Donnelly also wrote that the lawsuit would have a “strong likelihood of success.” “There is imminent danger that, absent the stay of removal, there will be substantial and irreparable injury to refugees, visa holders, and other individuals from nations subject to the January 27, 2017 executive order,” Donnelly said.

Shakir said the stay will affect those who are “currently detained in airports” and the ACLU’s lawyers “will continue litigating the rest of the people impacted” by the order. Trump’s order has led to large protests at airports around the country.

Critics charge that it amounts to a “Muslim ban,” while Trump and his team have maintained the order is not designed to target any specific religion and is merely aimed at terror-prone nations.

New York Muslim Who Plotted ISIS Machete Attack Screams In Court: “There’s Going To Be More Of Us”

Lawsuits Against Trump On ‘Muslim Immigration Ban’ Will Fail Fast

The Constitution gives Congress and the President exclusive, plenary control over immigration. This is how both Carter and Obama could single out various states or beliefs to exclude migrants on that basis, as both did.

Why am I not surprised?

I'm certain that the courts are packed with similar globalistic and Islamophilic judges.

Something stinks to high heaven with the appointment of this judge. According to the 1/28/2017 BrooklynDailyEagle:
===>"Judge Ann M. Donnelly was officially sworn in as the 61st judge of the Eastern District of New York during an investiture ceremony at the Roosevelt Courthouse in Downtown Brooklyn on Friday night.". . ."Donnelly was nominated to be a federal judge by President Barack Obama on the recommendation of Sen. Charles Schumer. On Friday, she had the oath of office administered . . ."<===

The time stamps suggest overt seditious acts by Schumer and Obama - days after Trumps inauguration and within hours of Trump's EO.

Note the comments to this linked article are also telling:

===>"notonmywatch
donnelly is a horrid judge. i have been on the short end of the stick where donnelly upheld an absurd ruling by another judge (carla craig) where that other judge quoted a repealed statute. she ignored several facts in papers that were inconvenient in her decision. she quoted one line of text in a transcript to bury me when the other side, in the next line in the transcript, admitted that the first line was not true. she use artfully placed misstatements(lies) to make it appear as if she met the minimum standard required by law to keep me from getting oral argument. she promised to address the merits in a motion to reconsider and then did not address the inconvenient points made in the motion. between her and cogan who has the "el chapo" case it is a kafka-esque sideshow of bullies and cheating in the eastern district. you won't drain the swamp till you add up all the malfeasances done to the low profile people."<===
*****
===>Chris
Well, well, well..."Keep Obama in President" says Chuckie"<===

Or was she sworn in the evening of January 20?