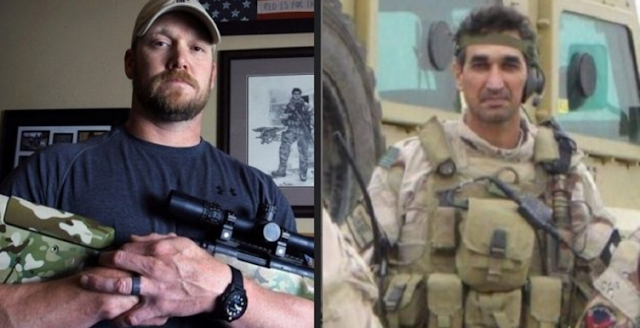 
We talked to Johnny Walker, who worked as Chris Kyle's Iraqi translator during the Iraq War.

Walker held nothing back:

"I agree 100% President Trump's decision. The national security of the United States is a paramount issue.
All President Trump is doing is ensuring that people can go about their day without living in so much fear. Women won't have to worry about walking around the mall; kids won't have to worry about going to the school.
Look, these countries don't have a database that keeps track of its citizens. And we can't depend on a government database in countries that do, because if they have one it has a political agenda behind it.
It wouldn't be hard for someone to get into the U.S. whose loyalty lies with ISIS or a militia aligned with Iran. While the militia isn't necessarily our enemy right now, they don't have loyalty to the U.S., they are loyal to the interests of the government that funds them. And that government says “Death to America.”
ISIS's strongholds are in Iraq and Syria. We all know what they want to do to Americans."

He pointed out how some of the Iraqi government is involved with terrorism:

"Besides, the government of Iraq is involved with the militia who gets all their support from Iran, the number-one state sponsor of terrorism. ISIS has a haven in Libya. Al-Shabaab is in Somalia and has pledged their allegiance to ISIS.
Iran has several terrorist groups affiliated with it. Yemen has Al-Qaeda, ISIS and the militia. And in Sudan, Hamas raises money for terrorism and has a presence.
The bottom line is this: Americans need to understand that this is for national security."

Then Walker explained the one area where he disagrees with the order:

"But we also need to be concerned with the interpreters, linguists and soldiers who worked shoulder-by-shoulder with the U.S. to fight against terrorists. There are thousands of translators and friendly forces over there who earned the right to come to America.
They've all become targets to groups like ISIS because they worked with America. They made many sacrifices in doing so, they deserve a second chance."

And spoke about his personal experience as a translator:

I was one of those translators. I worked with Navy SEALs to help kill the enemy. Working with the American military, made my family and me a target. Al-Qaeda murdered my brother because of me helping the Americans.
There are translators over there, who have proved their loyalty. ISIS and other groups keep a list of their names. It's not like in Washington, D.C., you can't just hide out somewhere.
In all seven countries, you're either known by your family or tribe, and everyone is connected. You cannot hide yourself, they will find you. When the terrorists find you, they don't just murder you, they murder your brother, sister, dad, mom, grandparents, cousin, and friends, too."

Walker made it clear that he doesn't think everyone in Iraq should come here:

“No, I don't believe that everyone deserves to come here, but the ones who showed their loyalty do.”

He also reaffirmed his support for Trump:

“I am in full support of the decision that the president has made. We all need to forget about ourselves and put American lives first. Trump's decision will help prevent terrorism and the death of more innocent people.”

Then, Walker finished by posing a question for everyone who thinks Trump is racist because of the “Muslim ban”:

“What about all the other rich Muslim countries? They banned Muslim immigration from the very beginning. Saudi Arabia, the UAE, Bahrain, Qatar— are they racist, too?”

A fine question, but one that Trump's critics are sure not to answer.
Posted by Pastorius at 2:42:00 am

Let's see if any of the cable news networks will cover this story.