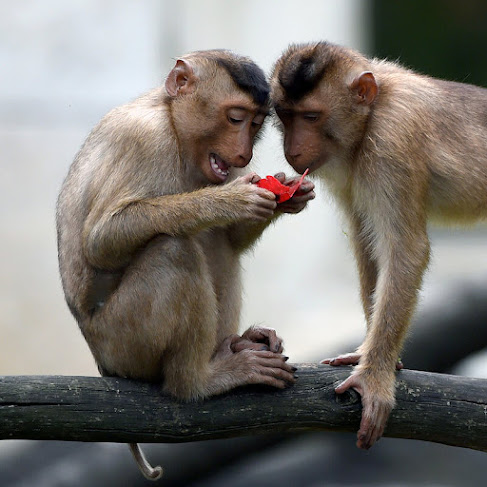 Is The CDC Transporting Little Monkey Bioweapon Bombs Around The United States?

According to a CDC spokesperson, the monkeys were en route to a CDC-approved quarantine facility after landing Friday morning in New York. They are originally from Mauritius, a country in eastern Africa.

The crash happened around 3:30 p.m. Friday afternoon, that’s when the three monkeys got free in the Danville area. Police say the driver who was transporting the monkeys was charged in the crash.

Originally, state police told us four monkeys were on the loose. As of Saturday afternoon, some people were still worried.

“Little monkeys, we got bears, we have coyotes, we have deer, you know all the time. A little 3-pound monkey doesn’t scare me, but why are they so concerned about it is what concerns me,” said Howie Lerch, Valley Township.

Friday night Newswatch 16 spoke with Michelle Fallon of Danville, who saw the entire accident. She jumped into action; helping both drivers and the loads they were carrying.

“I walk up back on the hill and this guy tells me, ‘Oh, he’s hauling cats. I said, ‘oh.’ So I go over to look in the crate and there’s this green cloth over it. So I peel it back, I stick my finger in there and go ‘kitty, kitty.’ It pops its head up and it’s a monkey,” Fallon said.

Fallon was contacted Saturday by the CDC and was told to monitor herself for any cold-like symptoms.

Forgive me but being paranoid, but remember what Epa always used to say?

If you think you might just being paranoid, YOU'RE NOT BEING PARANOID ENOUGH!

Revere Rides Again reminds us that in 1989 there was an outbreak of Ebola brought about by lab monkeys in Reston, Viginia. At the time, it was not known that the strain of ebola the monkeys had was non-lethal to humans. Thank God it was.

The lesson to be learned is, THESE GUYS AND THEIR MONEKYS ... THEY'RE NOT TO BE TRUSTED!

Americans' introduction to the Ebola virus came 25 years ago in an office park near Washington Dulles International Airport, a covert crisis that captivated the public only years later when it formed the basis of a bestselling book.

In the fall of 1989, dozens of macaques imported from the Philippines suddenly died at Hazelton Research Products' primate quarantine unit in Reston, where animals were kept and later sold for lab testing.

Company officials contacted the U.S. Army Medical Research Institute of Infectious Diseases at Fort Detrick, Maryland - Jaax's unit - concerned they might be dealing with an outbreak of hemorrhagic fever among the monkeys. Initial testing revealed something much worse: Ebola, specifically the Zaire strain, which had a 90 percent fatality rate in humans.

Four workers at the quarantine facility tested positive for exposure to the virus. Amazingly, they never even got sick. Researchers eventually realized they were dealing with a different strain, one now known as Ebola-Reston. Though its appearance under a microscope is similar to the Zaire strain, Ebola-Reston is the only one of the five forms of Ebola not harmful to humans.

But Jaax and his unit, including his wife Nancy , also a scientist, did not know that while at the monkey house. They just knew they had to clean it out, and do it while keeping a relatively low profile that wouldn't scare the neighbors.

"You could walk in and smell monkey everywhere," said Dr. C.J. Peters, who oversaw the Army's response to the outbreak. "There was a little shopping center nearby. ... There was plenty of opportunity for trouble."

While the Army scientists had strong protocols in place for studying viruses safely in a lab, they were not well prepared to stabilize and contain an outbreak in a private facility. At the time, Jaax said, nobody - including the U.S. Centers for Disease Control - had that kind of experience.

AND THEN THERE THIS (Forgive me, but I just can't help myself):

Living within an hour or so of the area the warning was one monkey loose do not search for or have contact with. Monkey since captured. as for cats the woman stated she saw what she thought was a Cat crossing the road then went to the truck and was surprised. That's the story we here in Pennsyltucky got.

I already told my spouse, "Injected with something. Transported prior to viral load large enough to infect others." Problematic, the critters were dancing about in the trees prior to being captured.

Wasn't it the film, "Outbreak" where a primate escaped the lab?"

RRA,
FYI. A day care center is now on the site of the lab which was the destination for those monkeys transferred at the gas station on Leesburg Pike, Reston, Virginia.

The book on the topic: The Hot Zone by Richard Preston. Also see Preston's book The Demon in the Freezer.

I have read "The Hot Zone". Also, an excellent book, "Germs".