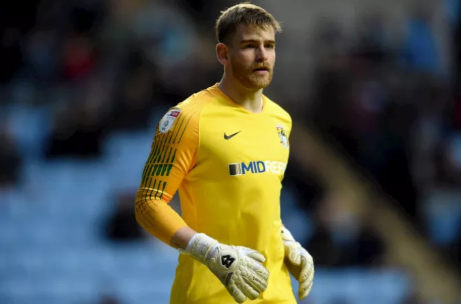 Lee Burge, 29, has been ruled out of action because of an ‘inflamed heart’

Sunderland goalkeeper Lee Burge is expected to remain sidelined for another four or five weeks because of heart issues developed after receiving the COVID-19 vaccine.

Burge suffered heart palpitations recently and was shortly after diagnosed with an inflamed heart. Sunderland’s manager Lee Johnson believes that the heart problems affecting his goalkeeper could have been caused by his COVID vaccination.

The 40-year-old coach said on Friday: “It seems to happen a lot after these injections or COVID. The weighting would be on COVID but you can’t rule out, I suppose, vaccination.”

The manager added: “He [Burge] has 4-5 weeks when he has to keep his heart rate below 100bpm and have blood tests and hope it goes back to normal.”

Burge has largely been used as a back-up to Sunderland’s No. 1 goalkeeper Thorben Hoffman this season.

However, he has played nine times for the “Black Cats”, including in December’s League Cup quarter-final defeat at Arsenal. Data from December showed that around 75% of players in the English Football League (EFL) – in which Sunderland plays – have been either fully vaccinated, have had a single jab or were intending to be vaccinated.

Double vaccinated players totaled 59%, while 16% were set to get the jab, and 25% of players did not intend to get a COVID vaccine at that time.