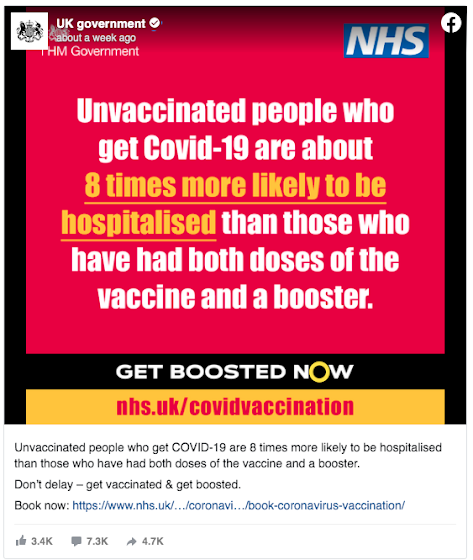 “Don’t delay – get vaccinated & get boosted,” reads a post by the official government Facebook page of the UK. “Unvaccinated people who get COVID-19 are 8 times more likely to be hospitalised than those who have had both doses of the vaccine and a booster.”

This post (archived here), however, did not get the reaction that the UK government was hoping for after it was hijacked by Americans and British citizens who apparently had a bone to pick with the establishment.

To be perfectly clear, no one here is denying that the covid vaccine appears to reduce severe illness from covid. As we reported last year, though a recent study showed that the vaccine does have a clear personal health benefit, drastically reducing the chance of serious illness or death once infected with COVID-19 — it also showed that it does not stop transmission.

However, simply being healthy appears to be a far superior plan of protection. Imagine, if for the last two years, instead of paying billions of dollars to big pharma to advertise their drugs and pay people to take them, that the state spent that money helping people to get in shape. The impact would have been enormous. Tens of thousands of lives could’ve been saved and the strain on the health care system would have been drastically reduced.

What’s more, as the adverse reaction count in America alone surpasses 1 million reports, the idea that it is “completely safe,” holds less and less water by the day — thus the reason behind the hijacking of the UK government’s Facebook post.

The post has received over 11,000 comments — most of them, anecdotal stories about a family member or friend who was injured or died after receiving the jab, and people seeing through the state’s propaganda.

There are literally thousands of comments like the ones below: