The Danish chapter of Stop the Islamisation Of Europe, SIOE, has come out with a disturbing report of what seems to be a co-ordinated attempt on the lives and/or physical well being of their leaders.

The photos below come from this source: 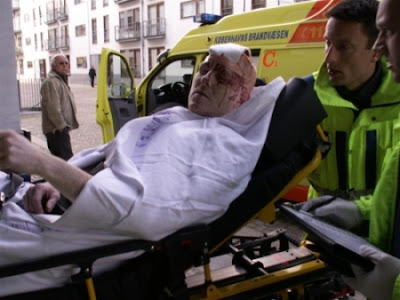 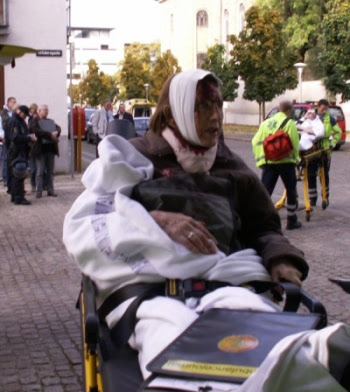 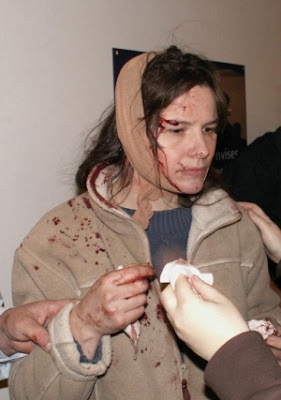 On sunday the 21th October SIOE Denmark had announced a demonstration in Copenhagen....Before the demo Anders Gravers (SIOE and SIAD) and 2 other members were driving in a van with three seats in the front, following the security car(...)

2-5 sek. after there was a loud bang and the frontwindow was damaged. About two autonomous looking types were in the front and two on each side smashing the side windows shouting "Get him out, get him out!" and started hitting Anders and the SIAD passenger in the other site with ironbars. The SIAD member in the middle was hit of a thrown filled soda bottle in her backhead.

Anders succeded after a while to kick one of the autonomous hard in the face as he leaned in to unlock the door. Anders managed to get out with a fire extinguisher from the van and hit another one hard on the shoulder. It remained later that they attempted to stab him down when there was found cut holes in the shirt, jacket and vest. Anders was wearing his security vest which saved his life.

Suddenly they disappeared and Anders got around the van and saw a SIAD member lying on the floor while he was beaten in the head of 4-5 persons with ironbars. Apperently they also tried to stab him down, but again he also wore his security vest which saved his life.

Suddenly someone screamed RUN RUN and they disappeared up the steep driveway. The elderly woman was lying on the floor completely still. She had been in the security car and got out immediately when the driver shouted OUT OUT. She didn’t know what to do and started running. She was hunted down by two persons and banged down with an ironbar. She lay completely still in the hope she wouldn’t get anymore. She felt they stood a moment watching her if she would move. Then they presumably ran to the other SIAD member on the floor and joined the attack on him.

Kleinverzet concludes with the following:

The SIOE site has more, including photos of the aftermath, New Zonka has background on this incident and the dereliction of duty by the Danish MSM. This was not reported AT ALL anywhere in Europe (much like the Amsterdam car-b-ques or the Brussels riots). Even the Danish MSM got it (deliberately?) wrong.

This could be just another stormy week in Eurabia. On the other hand, this could be the cauldron starting to boil. Fact is: I'm bracing myself.

"That's over in Europe and could never happen here," you say. Well, after a recent experience of my own, I'm not so sure that the danger is as distant as we'd like to believe.

Not long ago, I spoke in person to a group about the Islamification of the West, right here in the D.C. area. And guess what? Some present insisted afterwards that I have a security escort to my car. I'm not kidding! Here in America! You see, terrorism comes in different forms, including that of intimidation.

So, before you brush off the idea that the above attack is something which could happen only "over there," I suggest that you rethink your complacency. I've been rethinking mine. Understand that I am rethinking and considering some new strategies. I am not cowed. I will not submit! In fact, I feel a wave of ramping-up coming on.

AOW: I have translated the post to Spanish. This is terrible, because in this case, they have not disguised the attack in some kind of riots. No, they were after them. Really worrying.

LV,
Thank you for doing that translating. Get the word out!