"A Farewell To Arms" by Private S. Beauchamp

The Walter Winchell of our age has gotten access to some documents about the fake-but-accurate stories of The New Republic war-time “diarist”, Scott Thomas (Beauchamp). 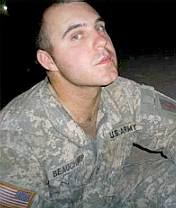 The documents appear to expose that once the veracity of Beauchamp’s diaries were called into question, and an Army investigation ensued, THE NEW REPUBLIC has failed to publicly account for publishing slanderous falsehoods about the U.S. military in a time of war.

I thought only Republicans stonewalled. The New Republic? Heaven forefend. These people are Al Gore’s champions. Like Al Gore, they would never lie. Never.

Meanwhile, Drudge has some gory details for us, and it turns out that what everyone suspected was right all along:

THE NEW REPUBLIC has been standing behind the stories from their Baghdad Diarist, Scott Thomas Beauchamp…. On August 10, the editors at TNR accused the Army of “stonewalling” their investigation into the stories by preventing them from speaking with Beauchamp.

The DRUDGE REPORT has since obtained the transcript of a September 7 call between TNR editor Frank Foer, TNR executive editor Peter Scoblic, and Private Beauchamp.[my emphasis] During the call, Beauchamp declines to stand by his stories, telling his editors that “I just want it to end. I’m not going to talk to anyone about anything really.”

...a signed “Memorandum for Record” in which Beauchamp recants his stories and concedes the facts of the Army’s investigation -- that his stories contained “gross exaggerations and inaccurate allegations of misconduct” by his fellow soldiers.

The Army concluded that Beauchamp had “completely fabricated” the story of mocking a disfigured woman, that his description of a “Saddam-era dumping ground” was false, and that claims that he and his men had deliberately targeted dogs with their armored vehicles was “completely unfounded.” Further the report stated “that Private Beauchamp desired to use his experiences to enhance his writing and provide legitimacy to his work possibly becoming the next Hemingway.”

Well, there’s one dead daydream for you. What will they call his collection of mendacious tales? “For Whom the Bell Tolls” has a certain ring to it. Certainly the Pink Ladies would buy it.

But now Beauchamp will have to re-invent himself. Perhaps a new career that doesn’t require integrity or the need to stay in touch with reality. Slap a wig on him and have him practice his French. We could use a new Marie Antoinette in the recession everyone says is coming. Certainly this Private has a certain je ne said quoi required for the rôle of Public Distracter.

Drudge ends his revelations this way:

The report concludes that “Private Beauchamp takes small bits of truth and twists and exaggerates them into fictional accounts that he puts forth as the whole truth for public consumption.”

In other words, he has more information up his sleeve.

CQ has an update:

Michelle Malkin has great screen grabs of the transcript of the call between Franklin Foer and Peter Scoblic of TNR and Beauchamp. In one, it becomes obvious that it was TNR that was responsible for Beauchamp’s silence, and not the Army…

On second thought, maybe Beauchamp could take Dan Rather’s place. We need someone capable of filling Dan’s shoes. I hope he can speak Southren...
Posted by Dymphna at 12:29:00 am

Good to see you posting here, Dymphna. Thanks.