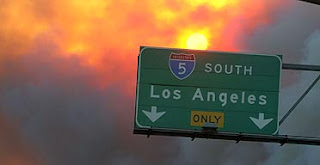 From USA Today (thanks to Michael):

PHOENIX (AP) — The FBI alerted law enforcement agencies last month that an al-Qaeda terrorist now in detention had talked of masterminding a plot to set a series of devastating forest fires around the western United States.
Rose Davis, a spokeswoman for the National Interagency Fire Center in Boise, told The Associated Press that officials there took note of the warning but didn't see a need to act further on it.
The contents of the June 25 memo from the FBI's Denver office were reported Friday by The Arizona Republic. Davis declined to share a copy of the memo and an FBI spokeswoman in Denver didn't immediately return a telephone call.
The Republic reported that the detainee, who was not identified, said the plan involved three or four people setting wildfires using timed devices in Colorado, Montana, Utah and Wyoming that would detonate in forests and grasslands after the operatives had left the country.
The memo noted that investigators couldn't determine whether the detainee was telling the truth.
The newspaper said many forest law enforcement officers it contacted had no idea the warning had been issued.

I live in Orange County, California, near UC Irvine. Tonight on the way home from work, I heard on KFI AM 640 Radio news that the FBI and the ATF were investigating an arsonist who started a fire in Santiago Canyon.

That is near UC Irvine.