"Eat It, Lick It, Snort It, Fuck It": Britney Storms Out Of Court 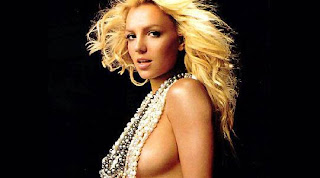 For no good reason at all, I am posting this story. Well, actually, maybe I do have a good reason, but I'll get to that at the end of the post:

UPDATE 4:10 PM, Pacific — Britney Spears made a brief exit from court just moments ago. The pop singer stormed out of the courtroom in an agitated state. She was yelling, “Eat it! Lick it! Snort it! F*** it!”

Spears lawyers ran after her, as did her former assistant, Alli Sims, who is with her in court.
Britney then returned to the courtroom, sobbing.

LOS ANGELES, Calif. (October 26, 2007) — Hollywood’s highest-profile custody case was back in court Friday, with Britney Spears arriving in her Mercedes convertible for a hearing to work out custody arrangements for her two young sons.

Her ex-husband Kevin Federline was also under court order to attend the Superior Court hearing.

Spears was spotted after arriving with a female companion and parking in an underground lot. Earlier in the day, a lawyer for Spears won a motion to bar videotaping of deposition testimony in the case.

Spears’ lawyer, Thomas Paine Dunlap, argued that video of the depositions would almost certainly wind up on YouTube. He said his celebrity client had a right to be protected from that exposure.

Superior Court Commissioner Scott Gordon made his ruling in spite of his concern that she is constantly courting “inordinate amounts of media,” which he said runs counter to her expressed desire for privacy.

“I’m not chastising her,” Gordon said.

“She’s an adult. But what I’m saying is someone who is always going to places where there is an inordinate amount of media, it doesn’t square.” Dunlap countered that the pop star was not trying to create media attention.

Attorney Mark Vincent Kaplan, who represents Federline, said his client wanted the depositions to be videotaped to preserve the demeanor of witnesses who testify during the closed sessions. After the commissioner’s ruling, Kaplan asked that experts and other parties be allowed to be present to see how witnesses responded.

Gordon said he would allow two people to observe the witnesses.

During the afternoon hearing, a lawyer for Spears was expected to argue that she has complied with court orders and should regain the shared custody she lost earlier this month.

In an unusual twist, a special metal detector was installed outside the courtroom. Officials were confiscating cell phones from everyone entering the floor to prevent media, attorneys and spectators from taking pictures in the courtroom. The process caused a backup of lawyers who had to empty brief cases for inspection.

During the morning hearing, Dunlap complained that he was being forced to do things he had never done before to get into a courtroom.

Gordon responded dryly, “This may be the manufacture of your client.”

Ok, so here's the reason I am posting this story. First off, I can put up a hot picture of Britney Spears, and that's always good. It's good for the libido and it's good for the traffic.


But beyond that, I just want to say, I love America. I love the Western world. I love that we can obsess over completely stupid bullshit like this.


That makes me inordinately happy.


If the Islamofascists of the world had their way, everyday, we would feel like we did the day of 9/11.


Doesn't it feel a lot better to just worry about Britney?


Anyway, this morning an "Anonymous" commenter came to IBA and left the following comment:

I'm a very proud, well informed, and widely read leftist. HOWEVER, I do realize the threat that islamic supremicism and fascism poses. What I find morbidly ironic is that the right (in bed with fascism) is the political voice that realizes this. I fear that, without a brain the failure of the left is going to deal a serious blow to civilization.


Here's my response to him:


We accept all voices here at the Infidel Bloggers Alliance. Myself, Epaminondas, and several of our other writers are lifelong Democrats who have turned rightward because of exactly the ignorance you speak of the left demonstrating.


If you want to, you ought to begin commenting here from your left perspective, and if you are not too hostile towards us, I will make you a member, and you can propose some leftie solutions to the problem.


Thus far, I have not been able to find any. I haven't been able to think of any way to win this war, other than to kill our enemies.

That's why I have turned "rightward."

However, that being said, the exact reason I am doing this is because I don't want to see gays, apostates, and adulterers stoned to death, and because I like freedom of speech/conscience, and I like all the decadent freedoms of the West.

Yes, I like looking at pictures of Britney Spears (and other hot chicks). I like that gays can roam the streets freely. I like that people can change religions like they change their shoes. I like that Rosie O'Donnell can go on TV and lie about 9/11. I like all of that.


In fact, I fucking love it, and I never ever want it to disappear.


Long live Britney and Kevin Federline, and whatever the fuck it was that Britney was trying to express with what she blurted out in the courtroom yesterday.


Just think about it, guys. It must have had something to do with Kevin's demands of her, huh? Wouldn't you just love to know?


Better yet, I think I'll just make something up and think about it while I, uh, make myself happy.


Have a great day all my Western brothers and sisters.
Posted by Pastorius at 3:20:00 pm

I'm guessing that you aren't actually as overjoyed about the existence of personalities like Britney Spears as you claim to be. Or, that is, I'm hoping. But, speaking from the Middle of Things, Islam is crazed but if we don't show it SOME degree of appropriate respect, we're all screwed. It truly is a Catch-22.
By the way, by "Middle of Things", I mean a nonpartisan position. God knows I've been a party supporter- but then I turned 17 and grew up.