(All emphases by Always On Watch) 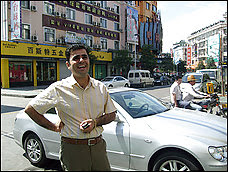 Excerpt from "Chasing the Chinese Dream: A Growing Number of the World's Emigrants Are Heading East, Rather Than West, in Search of Safety, Tolerance and Opportunity", an article in the October 21, 2007 edition of the Washington Post:

...In Yiwu, a city in the eastern province of Zhejiang that is the home of the world's largest wholesale market, "Exotic Street" lights up at night with stands filled with smoking kebabs, colorful hookahs and strong sugared tea for the almost exclusively Arab clientele.

Communist China's first attempt to make friends with outsiders and encourage cultural exchange came during the 1960s and '70s, as part of a campaign for ideological leadership in the developing world. China sought to spread socialism and unite the farmers of the world.

Today, its efforts to woo developing countries are driven by more calculated, strategic goals, most notably its need to secure long-term contracts for oil, gas and minerals to fuel its booming economy.

As part of this campaign, China has sought to portray itself as more open to Islam than other non-Muslim nations.

Over the past 20 years, the government has gradually allowed its own Muslim minority to rebuild institutions that were devastated by state-sponsored attacks on Islam during the Cultural Revolution. Islamic schools have opened, and scholars of Islam are being encouraged to go abroad to pursue their studies. Unlike Christians, China's estimated 20 million Muslims are considered an ethnic minority, a status that confers certain protections and privileges.

"In America, for people with my religion there can be a lot of problems," said Adamou Salissou, 25, from Niger. "The image they have of Muslims is that they are terrorists. Chinese don't have a problem with religion. They think, 'It's your religion and it's okay.' "

With funds from a Chinese government scholarship, Salissou is pursuing a master's degree in biochemistry and molecular biology at Xiamen University in Fujian province, where a community of Arab traders thrived in the 7th and 8th centuries. Salissou's brother Nour Mahamane, 23, joined him this fall and is studying for a master's degree in petrochemistry in Shanghai.

Mosques in areas such as Yiwu, where foreigners are concentrated, have been given more freedom than some others, which are under strict state control. Officials at the mosque here estimate that more than 20,000 Muslim immigrants, about 1,000 of them from Iraq, have settled in the area over the past five years....

The camel's nose in the tent. China is not welcoming these Muslim immigrants with open arms, however:

...But there are limits to China's welcome.

It's nearly impossible for foreigners who don't have Chinese ancestry to obtain citizenship, and like anywhere else, China has had its share of racial misunderstandings and clashes with foreigners....

The article concludes as follows:

In Yiwu, there was anger in the Iraqi community after an Iraqi man, Mostafa Ahmed Alazawi, was found dead in his rented home on March 30. His family wanted him to be buried in China and applied to the city for a piece of land. The city ruled that foreigners could not be buried in China, forcing the family to ship the body back to Iraq. The decision fueled outrage among the Iraqis. Through a friend, the family declined to be interviewed.

Anwar said that despite the tensions he's happier to be in China than elsewhere in the world.

You can read the entire WaPo article HERE.

Terrorism does not make a difference among people. All groups and tribes should be united in the fighting terrorism and uprooted this bad omen phenomenon by cooperation of the government.
Email: info@terrorvictims.com

Hey pas, I just noticed you got E-mail feedback up...Nice one Matey!