As the Center for Vigiliant Freedom attempts to build itself into a multi-national political party representing Democracy and Human Rights (as opposed to the politically correct totalitarianism of the European Union) already, there are attempts to silence the fledgling organization. 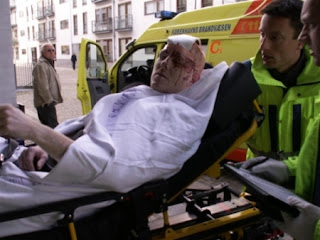 Europe does not emanate from Islamification, but instead has come from "bigots." Tonight comes the scary news that, already, there has been an attempt on the life of one of the earliest CVF founders.

The attacks on freedom fighters, truth tellers continue unabated. The siege on Europe is of frightening proportion, which is why these efforts are so important and must succeed.
MURDER ATTEMPT ON SIOE/SIAD DENMARK LEADER AND MEMBERS

SIOE website
SIOE Denmark is only coming with a report now on the murder attempt and the demonstration in Copenhagen. There was a need for recover but also because the main stream medias have been either completely silent or have published lies about the incidents. We have waited to see if the msm would write about the incident. This is the first article about it, and one more will follow about the demonstration.

Go read the whole story over at Atlas Shrugs.