Has Ahmadinejad's Power Eclipsed That Of The Mullahs? 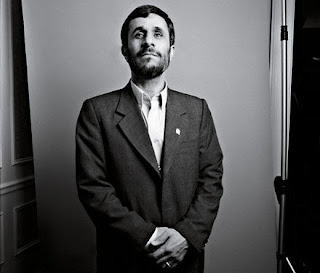 I believe it has.

And, it seems that he is aquiring even more power than the Ayatollah himself.

I often hear the argument that the Mullahs have the power and that Mahmoud is just the mouthpiece. I have never bought this argument. Much of the power in this world turns on charisma, and the ability to articulate one's arguments in front of the wide audience of the world.

Old Mahmoud has been very, very successful in that regard. It is my opinion the power of the Mullahs is waning, for whatever that is worth.

Read on (from Debka):

President Mahmoud Ahmadinejad has laid down the gauntlet.

Having prevailed over the more pragmatic elements of the Islamic
Republican regime headed by supreme ruler Ayatollah Ali Khamenei, he and his
Revolutionary Guards are challenging the United States to do its worst.

Saturday, Oct. 20, the fire-eating president succeeded in removing the
formidable Iranian nuclear negotiator, head of the National Security Council,
Ali Larijani, from his path. He then sent the Revolutionary Guards missile and
artillery commander, Gen. Mahmoud Chaharbaghshe, to warn that, in the first
minute of an attack on Iran, the Islamic Republic would fire 11,000 missiles and
mortars against enemy (US and Israeli) bases. The scale of ordnance threatened
implied Tehran's certainty that Syria, Hizballah, Hamas and the pro-Iranian
militias in Iraq would join the assault.

DEBKAfile's Iran sources report that the president's venture into
brinkmanship points to his confidence that neither the US not Israel can or will
dare to strike at Iran's clandestine nuclear facilities. Khamenei has shown no
sign as yet of reining him in.

The Russian president Vladimir Putin's visit last week to Tehran was a
disappointment to the clerical rulers. Contracts for the Russians to complete
the Bushehr atomic reactor and supply the fuel for its activation were not
signed during that visit, although they had been drawn up previously between
Larijani and the head of the Russian Nuclear Energy Commission Sergei Kiriyenko
in Moscow.

At the last minute, Ahmadinejad, backed up by the IRGC chiefs, put his
foot down against Putin's pre-condition which was incorporated in the contract
for a joint Russian-Iranian mechanism to oversee the reactor and guarantee its
non-use for weapons production. Putin made a last attempt to talk Tehran round in a long conversation with the supreme ruler Wednesday, Oct. 17, before he flew out of Tehran.

Initially, there were reports that the Russian president had presented
new proposals for solving the crisis, which Khamenei promised to seriously
examine. The Iranian News Agency IRNA then quoted Khamenei as saying
noncommittally: "We will ponder your words and proposal."

However, on Friday, Oct. 19, Ahmadinejad made remarks which
contradicted statements by the supreme ruler and Larijani. He denied that Putin
had brought any new proposals to Tehran on the Bushehr nuclear reactor. This
denial had the effect of presenting Larijani as a failure. His efforts to
achieve a new set of Iranian-Russian nuclear contracts and a breakthrough for
Tehran that would have kept Moscow in the international camp opposed to tougher
UN Security Council sanctions were shown up as useless.

The Iranian president had manipulated the episode in such a way as to
leave the nuclear negotiator no option but to quit.

In contrast to the ultra-radicals, Larijani is described by DEBKAfile's
Iranian sources as a practical diplomat who believed in a compromise that would
let Iran continue its uranium enrichment process and develop its nuclear
program, up to the point of weapons capability, without taking the final step of
actually making a bomb.

His humiliation marks the further rise in Ahmadinejad's influence and
his unimpeded drive to go all the way to a military showdown with the United
States and Israel over Iran's nuclear ambitions. In private conversations in
Tehran, the president argues that neither is in a position to go to war against
the Islamic Republic.