First, we have this photo posted by Reliapundit at THE ASTUTE BLOGGERS and by others elsewhere, showing First Lady Laura Bush sitting between two black sacks: 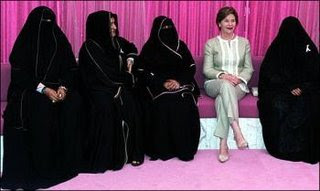 Little consolation, of course, but at least our First Lady wasn't wearing the abaya.

I started clicking links at Foehammer's Anvil and found that Laura Bush did indeed done the abaya. Photo from the White House web site, via this posting by Debbie Schlussel: 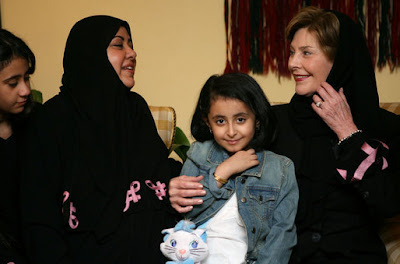 Debbie Schlussel also found the following at USATODAY.com (emphases mine):

Given that the first lady wore a headscarf when she visited a Jewish holy site in Jerusalem and a mantilla when she met with Pope Benedict XVI, we asked if Bush will be wearing some sort of abaya while she's in Saudi Arabia. "No," Sally McDonough, the first lady's spokeswoman, tells USA TODAY's David Jackson, adding: "they do not expect nor encourage it" of Western visitors.

Condoleezza Rice and Madeleine Albright didn't wear head coverings when they visited Riyadh on official business, according to the photographs in our archive.

Update at 12:45 p.m. ET: McDonough says they have a nuanced policy when it comes to women who are visiting Saudi Arabia as part of the first lady's delegation.

"According to our team, during any activities on your own time - going to the mall, going out of the hotel for dinner, etc - women need to follow Saudi law and wear an Abaya. During official meetings, it is not necessary," she writes in an e-mail to USA TODAY. "As per guidance from Embassy on the ground, as members of the official traveling party, we will not need to wear any head scarves or abayas at any point."

Apparently at some "point," First Lady Laura Bush felt the "need to wear" the abaya and even to post the photo at the White House web site. In my book, that "need" is called dhimmitude.

I say it again, just as I did in an earlier posting: