The far right party of Demark is not pulling any punches getting their message across about the Islamic threat to their country. It seems that the far-right party depicted Mohammed in one their election materials. Though an honest interpretation of events surrounding the well known Mo-toon controversy, this political ad didn’t sit very well with some Danes. To wit – a Danish-Muslim group.

The ad by the Danish People’s Party, the country’s third largest political force, showed a hand-drawn picture of the Islamic prophet under the slogan “Freedom of expression is Danish, censorship is not”. The ad was condemned as a “provocation” by at least one Danish-Muslim group, as Islam forbids representation of its most important prophet. 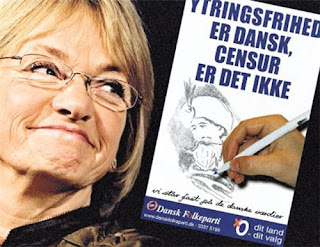 The Danish-Muslim group hit back.

What a war. The first shot fired is a cartoon drawn by a pen.

How fucking stupid can the dumbass Muslims get?

The crayon is mightier than the sword.

Dag,
That is brilliant.

Glad you're back here.

.
draw not Muhammad -
Islamic law can only
apply to Muslims...

Muslims not bound by Buddhist
Christian or Jewish doctrine


absurd thought -
God of the Universe says
you have NO rights

to hate religions
that demand to convert you

.
absurd thought -
God of the Universe calls
for sick ideologies

wanting to know or teach it
is RACIST say the WACKOS
.