There is only one party with slightly different outlooks. This party consists of government service, multinational and large businesses, or financial and CERTAIN academic institution members whose upbringing leads them to believe they are better qualified than each american to make decisions for each american, and in doing so form BOTH a choate and inchoate political party which self arrogates power, and rewards and maintains both member to member and generation to generation authority.

Today’s evidence from the Hill:

Congressional Republicans are considering holding off on repealing some of ObamaCare’s taxes, according to lobbyists familiar with the discussions.
GOP lawmakers on the House Ways and Means Committee discussed the possibility of keeping some of the taxes in place during a retreat last week at the Library of Congress, the sources say.
Even if some of the taxes are not removed as part of the initial repeal bill, it does not necessarily mean they will remain indefinitely. Some ObamaCare taxes could be dealt with as part of a larger tax reform bill later in the year.
Still, there is at least a possibility that some taxes could remain in place to provide revenue for a replacement healthcare measure.

Here is #HOWITIS, buffoons … if these taxes are held in place by a treacherous GOP because they are members of this political class, the inevitable result of this endless and predictable process, which now will have demonstrated the president is IRRELEVANT to the political class’s doings, will find as it’s end point either an authoritarian right wing govt, or complete socialism because self governance will have become oligarchy.
The idea of these political class creeps, never relenting on their RECORD FEDERAL REVENUES in a stagnant economy, burgeoning with part time jobs replacing CAREERS, and day to day worry and struggle replacing planning children’s college, careers and vacations, is ANATHEMA IN AMERICA.

The political class STILL HOLDS the entry gates to to politics, but they have been told by poll after poll and vote after vote, we know they exist, we know HOW they do what they do, and we KNOW WHO THEY ARE, and they have lost our consent and lost our trust. When presented with CHOICE we vote out Eric Cantor and Hillary Clinton.
This situation in the USA CANNOT endure.
Those whose education makes them professionals of VARYING success in the real world in subjects we need experts in, are reminded they are from time to time to be CALLED UPON by the citizens for aid and advice in a part time contract with the people.
NOTHING MORE. 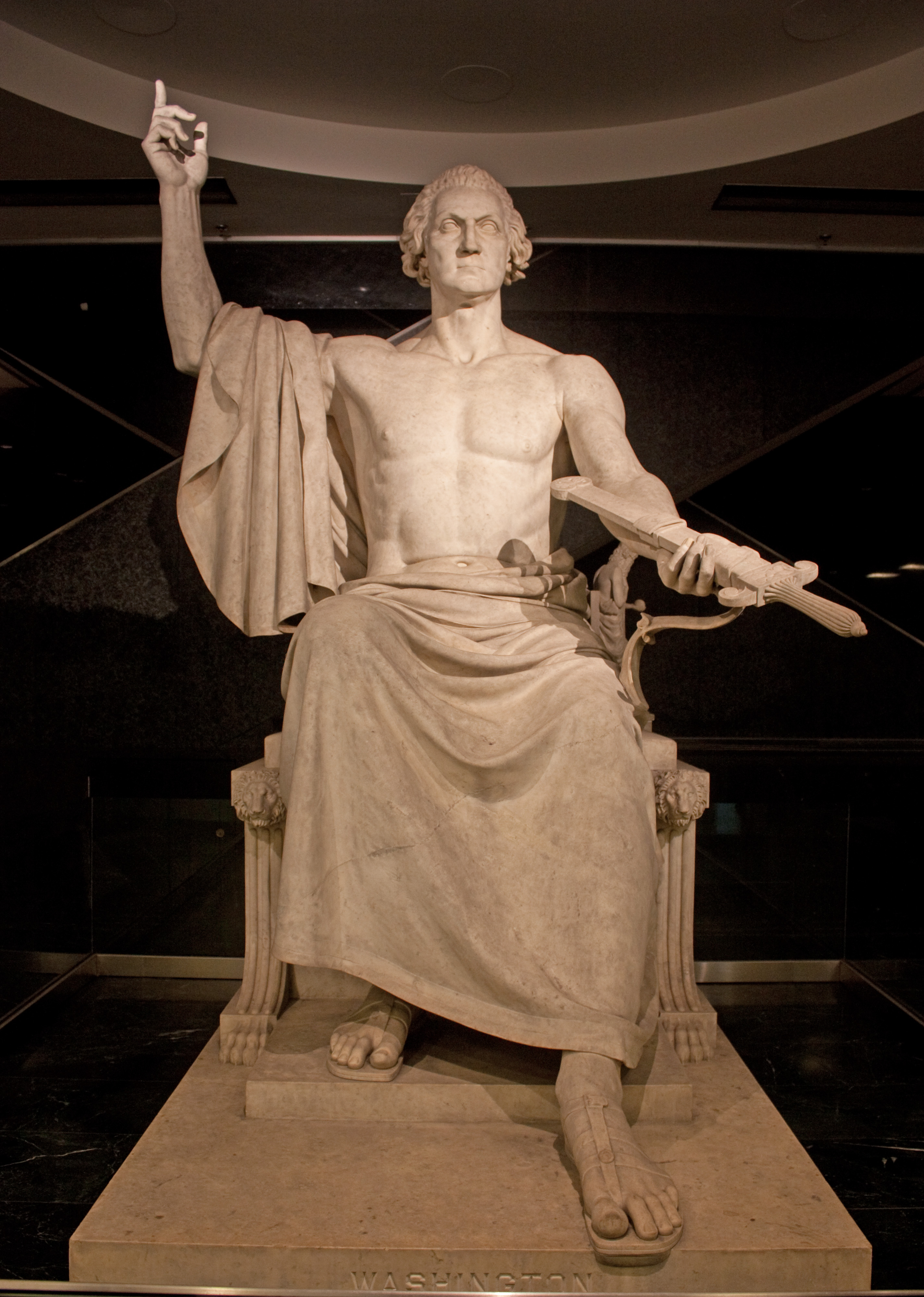 There is a reason this statue looks the way it does
I remind the political class, and professionals serving the people what that reason is.
BEWARE
Posted by Epaminondas at 10:56:00 am

Epa,
Could you clarify the meaning of the statue? I don't get it.

As far as the political classes are concerned:

The statue is Washington cast as Cincinnatus.
Cincinnatus was a roman general who retired to his farm and when Rome was invaded and ni danger of being defeated because of moronic consuls, senators approached LITERALLY as he was planting and plowing to offer him the DICTATORSHIP if he would only lead the armies.

He accepted and then retired in victory, as did Washington who was offered the kingship after the revolution.

Houdon who was the neplus ultra neo classical sculptor of the time came from france and followed GW around Mt Vernon for months to do a statue( he is standing -which is famous.

Houdon wanted an outright comparison to Cincinnatus, and Washington objected. Later in 1840 Greenough DID make the statue which is pictured

Washington thought direct comparison improper, overly grand, and a mark of hubris. After all, he served, he was lauded and went home. That was enough. His diaries make that clear.