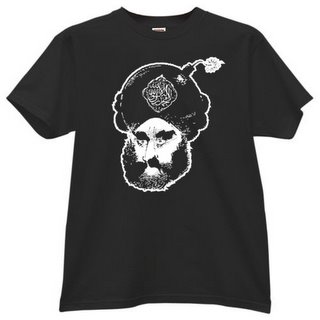 (PRWEB) - (PRWEB) February 21, 2006 -- Conservative t-shirt maker MetroSpy set off a firestorm when their newest design depicted a caricature of the prophet Mohammed with a bomb wrapped in his turban. According to Islamic tradition, graphic depictions of the Prophet Mohammed are forbidden. MetroSpy's apparent disregard for this tradition has outraged many in the Muslim world, prompting some to voice their displeasure by sending the company hate-filled email, online viruses and even death threats.

Johnathan Alexander, MetroSpy's production manager, says he's never seen anything like it. “It's a silly little cartoon. We've sold designs far more offensive than this for years”, referring to a t shirt which reads, “My Jesus can beat up your Allah.”

“For people to become so enraged over a drawing that they resort to burning down buildings and threatening to kill people is something I'll never understand,” Alexander said.

In one email the person writes, “We kill you and burn your shop. I am Muslim with forces in the U.S.A.”

Another email claims to be from the terrorist group Al Qaeda. It reads, “You only have 5 days and your company will disappear. I promise!” The email is signed, Saalem Al Qahtani, Al Qaeda.

One of the more disturbing messages simply says, “In two days we kill your family."

Over the past few days, MetroSpy has begun posting some of the emails on their website (http://www.shopmetrospy.com/).

According to Alexander, “Ever since we started posting the messages along with the sender's return address, the volume of hate mail has slowed down and the tone has changed considerably. In fact, some of the more recent comments could be considered polite.”

In an email which was traced to Saudi Arabia, the writer asks, “Could you guys do a favor? Please eliminate this picture from your goods because it's very embarrassing to our religion. If you do that, it would be a greatly appreciated. Thanks a lot.”

Another says, “I am sending this e-mail and I hope that you understand that what you are doing is offending more than a billion people in the world. I hope that your sales with other stuff be billions but not for this one offending product.”

Donia Saber of Elk Grove, California is an Islamic activist who writes, “I am deeply offended at the t-shirt company MetroSpy. Selling shirts with a picture of the Prophet is unacceptable and I assure you the Muslim community will not tolerate this.”

Despite protests over their offending design, MetroSpy plans to continue selling the t-shirts. As a precautionary measure however, MetroSpy has increased its security, sought the advice of a private investigative agency and remain in close contact with federal and local authorities.

Looks like I'm going to have to buy a t-shirt.
Here's my depiction of the prophet of doom.
http://amboytimes.blogspot.com/2006/02/more-cartoon-news.html

I've linked this story to my blog.

Supposedly the reason for this prohibition was to prevent idolatry-- by Moslems. Well, I am not going to worship the picture on the shirt when I see it-- so that shouldn't be a problem!

And, of course, Moslems have been making images of Mohammed for centuries...

It seems to me that the real problem is simply this-- Moslems want to impose their beliefs on others. They want everyone else to submit to their beliefs and customs.

wonder if there is a market for soft cotton, 3-ply Korans...

Does anyone know if one can buy a button with the picture of the bomb-headed Mohammad?

anonymous, (if thats you're real name}
check out this site for pics of mohammed tp
http://retecool.com/comments.php?id=13539_0_1_0_C
you'll have to scroll down to find it.

jason, try metrospy.com, they have the shirt