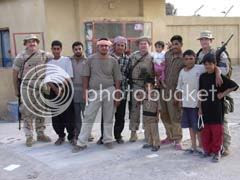 In answer to CUANAS’ call I submit the following:

The part I played in the liberation of Iraq was very small. Though parts of my unit faced much tougher situations my own experience would be considered quite boring. CUANAS asked me if I would write something of my experience in Iraq so here goes.

I don’t know if I was more frightened of the flight to Bahrain or the idea that I might be in a shooting war. My 20 years was almost up, I was a short timer and I was planning my retirement not how best to survive a war. Part of my work in the Navy involved searching for planes that had crashed. I had been a part of some major news stories, the Alaska flight that crashed off the California coast in early 2000, the Air Force A10 in Colorado to name a few. So the thought of the 20+ hour flight to Bahrain didn’t thrill me. To my surprise the corpsman had made a mistake and given me 180 valiums for the trip. It should have been twelve for the roundtrip but because of some snafu I ended up with enough to take one every day for six months. Well the first C-5 we got on had some engine trouble, (engine caught on fire is all) and so someone took me back home and I drooled all over myself until it was time for the next flight.

It was early March of 2003 and my unit had just been stood up. Until Sept of 2002 we were just a detachment. We were what the Navy called a warfighting laboratory. We were the Navy’s answer to minehunting in very shallow water, a brainchild of the late Admiral Boorda. We were made up of an eclectic group of Navy Seals, Navy EOD, Marine Force RECON, special combat crewmen and fleet technicians. The only unit at the time focused solely on, minehunting in very shallow water. Consequently what we trained for was clearing the beaches for the marines to land. Now we were headed to Iraq to clear the ports for humanitarian aid for the Iraqi people.
Back on the plane trip, I was told later that we stopped at Dover AFB and in Spain. Apparently I had breakfast and then we finally landed in Bahrain. Most of our unit had already arrived in Bahrain where we met up with the ship that was to support us and other units. The leading petty officer asked me about the drama on the plane to which I replied “What drama”. I didn’t even remember.

The next ten days or so were spent preparing our gear and going over our mission. We were to check the port for mines and ensure that the vessels carrying humanitarian aid could safely arrive. When the war started we went outside (it was nighttime) and we watched as the tomahawks flew over. It was a sight and I felt both excitement and a touch of fear. This was it.

We went to General Quarters at about 3 a.m. and for the next four days we watched the fighting on CNN, including in and around Um Qasr. The night before we were to go I wrote a letter to each of my children and my wife. I believe it was on March 23rd when I found myself in Um Qasr Iraq dressed in full chemical protective suit and wishing I was somewhere else. Several loads of men and supplies had gone before me and the guys in my platoon were all guys who were used to being shot at and things exploding. I was a freakin’ technician and to be honest I was scared *hitless.

At one point when our work in Um Qasr was almost complete we went outside the port and met some of the locals. They seemed glad we were there. We brought them water and food and some of the fellas gave them some cold hard cash. To give you some perspective $40 is about 6 months wages. One man with a little girl who was maybe a year old was asking us to take his picture with him. He seemed excited to have us there and this was important to him. I got to hold the little girl. It was great, it provided a piece of home and brought the war into perspective. These were the people we were there to help and I was proud to be doing it.

After ten days or so the rest of my platoon, the real warfighters (EOD, Marines ) were sent north to help look for a downed American pilot near Karbala. Myself and some others were sent to Az Zubayr just a few miles north to clear another port. Az Zubayr was a British base. We were used to working with them, they had a dive group and EOD techs with us in Um Qasr along with the Aussies. Once Az Zubayr was cleared we were flown back to the ship, on to the Kuwaiti Naval Base and then home.

What did I learn?

1. A respect for my brothers in arms, the men who do the real work of taking it to our enemies. The Force RECON guys, the SEALS and the EOD techs are amazing folks. I have the utmost admiration for those in the combat arms, who choose to train and fight and face the enemy head on. I will honor them in whatever small way possible for the rest of my life. HOOYAH!

2. The Iraqi people deserved better than to be treated the way they were by Saddam. The facilities we stayed in Iraq were practically new but because of the sanctions the facilities had been going unused and the people had been suffering.

3. One evil man like Saddam can cause so much misery , and doing nothing would make us complicit.

4. God makes men who are willing to show the ultimate act of love. To lay down your life for another.

Elmer's Brother,
God makes men who are willing to show the ultimate act of love. To lay down your life for another.

Thank God for those who sacrifice themselves out of caring for their fellowmen. We must not take these brave people for granted!

I got to hold the little girl. It was great, it provided a piece of home and brought the war into perspective.

I would also like to say thanks to you, Elmers Brother, as well as all the other men and women in uniform that have stood tall for America!!

You deserve our highest praise and respect!!

As I said my part was so very small, but it was my honor. Those who really deserve a thanks are those who are in harms way every day.