Into the Great Wide Open

Sheikh Ismail Nawahda, preaching to Moslem masses on the Temple Mount in Jerusalem on Friday, has brought it out into the open: the call to restore the Moslem Khalifate, or, "Genuine Islamic Rule."
A plan for the "Return of the Khalifate" was published secretly in 2002 by a group called "The Guiding Helper Foundation." The group explained that it wished to "give direction to the educated Muslim populace in its increasing interest in the establishment of Islam as a practical system of rule."

I'm shocked, shocked to find Imams suddenly preaching a return of the Khalifate and Shariah and the rest of the lot. I thought we had reached a kindler, gentler Islam 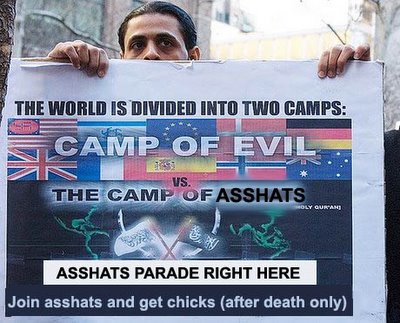 It's probably just a tiny minority of extremists.
Posted by Epaminondas at 10:37:00 pm

At Temple Mount? I wonder if this speech has special significance. A signal to Hamas, perhaps?

Maybe you're right Epa. Maybe these people I argue with on forums are right, too....the muslims don't really want war with the West or with Israel. What have I been thinking.

BTW, I see you've been working with photoshop, eh, Epa?