More Of The Alien Mindset 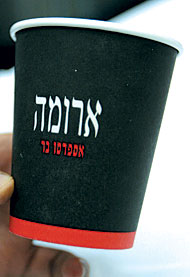 JEDDAH, 22 August 2005 — Paper cups with Hebrew writing disturbed both employees and medical staff at King Khaled National Guard Hospital on Saturday. The catering subcontractor for the hospital coffee shops began using them on Saturday after their usual supply ran out.

“We were shocked and angry,” said an employee. “How can Israeli products be allowed and how did they enter this hospital?” he asked.

The Filipino employee who works in the Al-Musbah coffee shop asked: “Why is everybody mad about the cups?” He was told: “Because they are made in Israel!”

According to hospital officials, the matter is being investigated and action will be taken.

Saleh Al-Mazroi, executive director for operations at KKNGH, said the matter had been referred to authorities in Riyadh and was being dealt with.

On the bottom of the paper cup was a website address and a telephone number. When Arab News looked at the website — www.orion-rancal.co.il. — it was found to be in Hebrew though there were a few words of English: “Israeli disposable paper, plastic and foam dinnerware supplier for restaurants.”

Arab News contacted Ibrahim Al-Musbah, manager and owner, who said, “I thank you for informing me. I will look into it personally and the offending articles will be disposed of.” He added that the company has a supplier in the Kingdom from whom they buy restaurant supplies. According to Al-Musbah, the supplier might be unaware of the problem.

Al-Musbah later contacted Arab News and said that the paper cups had come to his company by mistake. The cups were in a cardboard box that looked exactly like the ones his company normally receives and so the employees did not notice any difference. Al-Musbah added that the supplier was named “Jeelani” and that he would supply Arab News with his contact numbers today.

The paper cups were quickly withdrawn from use but might there not be other, less obvious, Israeli products in our shops and marketplaces?

Dear me, can The Kingdom ever be safe? I certainly hope that they check those marketplaces quickly......
Posted by Kiddo at 12:16:00 am

check this out, from a few months back :

A hospital in Dubai returned Dh200,000 worth of medical goods including physicians’ and patients’ uniforms, bed sheets, pillows and towels made in Israel, a source said.

The hospital source, who spoke on the condition of anonymity for himself and the hospital involved, said: “While going through the goods to check the quality and quantity, hospital administrators were shocked to find tags reading ‘made in Israel’.

“We are not sure these items are healthy, safe, and usable by physicians and patients. Maybe they contain harmful or infectious materials. Patients come here to be healed of diseases and not to be harmed.”

I've been to the cafeteria that makes those cups on occasion. It's amazing that they actually turned up in an Arabic owned hospital.

For years freedom loving Western companies have being signing contracts with Muslim (especially Arab) countries by which they promise not to trade with Israel. Some have disobeyed as we can see.

This is a riot.

While they are at it, why not chop off all arms infected with 'jewish' polio vaccine (Salk was a BIG jew).