We Won't Print Cartoons, But We'll Invite Thousands More Muslims To the US..... 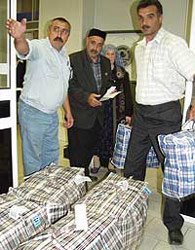 KRASNODAR, Russia, July 24, (IslamOnline.net) - The United States has agreed to grant citizenship to 7,000 Ahiska Muslims who will be settled in Pennsylvania, reported a Russian newspaper on Friday, July 23.

The first 11-strong batch of the Ahiska Muslims, living in the Russian province of Krasnodar, left for Geneva on Thursday, July 22, before flying to Philadelphia, reported Novie Izvestia.

It added that the Muslims would be housed near the grand mosque in Philadelphia.

The paper recalled that Krasnodar governor Alexander Tkachev was notified of the American decision on February 15.

Izvestia said the Russian government does not treat Ahiska Muslims as citizens and has not therefore given them passports or IDs.

An official in Krasnodar administration had told Interfax on Tuesday, July 20, that of the 11,999 Ahiska Muslims living in the region, 4,943 have received Russian citizenship and 744 have embarked on Russian naturalization procedures.

He added that more than 5,000 others have expressed a desire to emigrate to the United States.

Earlier, Chingiz Neiman-zade, chairman of Vatan, a Meskheti Turks association based in Georgia, said the United States had offered to accept the Ahiska Muslims living in Krasnodar as immigrants.

"On February 16, the International Migration Organization began an information program in Krasnodar to explain the terms for the resettlement of the Ahiska Muslims in the U.S.," he told Chicago Tribune on Thursday, July 22.

"The immigrants will be provided with housing and furniture, they will be helped to learn the English language and to complete formalities needed for residence in the US, which is especially important, and have been promised life-long welfare allowances for pensioners and the disabled."

Ahiska Muslims were happy with the American offer.

"This decision marks a great change in our life", said Tepeshon Swanidze, leader of the Ahiska Muslim community in Russia.

"We thank the US administration for its humanitarian decision", he added.

Ahiska Muslims , originally hailing from Anatolia, were exiled from their homeland after Russia seized the region of Ahiska following its 1828-1829 war with the Ottoman Empire.

Many Ahiska Muslims were forced to seek refugee in Erzurum in eastern Turkey after being persecuted by the Russian Cesar for supporting the Ottoman Empire.

One year later, they went to Azerbaijan where they currently reside.

Turkish and Azeri parliamentarians had recently appealed for an international intervention to pressure the Georgian government into allowing the return of Ahiska Muslims.

Ahiska became part of Georgia in 1918.

Is this really the time or place for this kind of "resettlement" program? And how is it that the Saudis can spend billions in the US and worldwide to build mosques and propaganda factories, yet neither they nor any other well off Muslim nations step up to the plate when a group of their co-religionists needs a place to go? Where does their concern and the flow of crocodile tears suddenly disappear to?
Posted by Kiddo at 1:15:00 am

Oil money must be rushing into Saudi Arabia with the current oil pricesa and there is lot of space. But consider this:

Would you want to live in Saudi Arabia?

Have you noticed how many Princes there are in Saudi Arabia? They each cost a fortune.

the fall of the house of saud

The House of Saud currently has some 30,000 members. The number will be 60,000 in a generation, maybe much higher. According to reliable sources, anecdotal evidence, and the Saudi gossip machine, the royal family is obsessed with gambling, alcohol prostitution, and parties. And the commissions and other outlays to fund their vices are constant. What would the price of oil have to be in 2025 to support even the most basic privileges--for example, free air travel anywhere in the world on Saudia, the Saudi national airline--that the Saudi royals have come to enjoy? Once the family numbers 60,000, or 100,000, will there even be a spare seat for a mere commoner who wants to fly out of Riyadh or Jidda? Reformers among the royal family talk about cutting back the perks, but that's a hard package to sell.

OK, perhaps not the Kingdom, the point was that I think this is a bad step for the US government and yet another attempt to make us look good in the eyes of the Muslim world, and I don't think that that tactic works in the firstplace.

Secondly, as a taxpayer in the US, I don't really feel like footing the bill and I'm quite sure that I'm not the only American who feels this way.

Pim's Ghost
I understand your point perfectly and would feel the same were I American.

If the Arabs wanted they could solve the Palestinian problem easily by financing a state for them. But they are not interested in closing the conflict.

Likewise they are not exactly known for their humanitarian aid - not even when concerning fellow believers.

And yes, the US tactics will fail. If it were purely a humanitarian decision to receive the Ahiska Muslim, I would applaud. But it is not. Also I would be very careful about whom I let into my country these days. Let us hope these Ahiska Muslim are all wonderful people. Who knows - we may be surprised.

This was a year and a half ago. I forwarded this article to one of my senators, Hilary, but I don't expect any kind of response from anyone in one of her offices. That life-long welfare thing doesn't really sit well with me, and there are way too many people in this country who could really use that free housing instead.

What do we know about the Grand Mosque of Phila?
Who is the Imam?
Where is the $$ from? Are they self sustaining?
Who provides their literature? CAIR, KSA, or self generated?

Now about these muslims..LET'S MAKE LEMONADE..can they read and write Arabic?

Islam is a much more subtle form of totalitarian fascism. It exists within our borders, and the virus of it is psychological.

See what happens in countries that have a 10% Muslim population: Holland, France. If it's not mass riots, it's murder of artists and politicians.

My message to all Muslims:

Sorry, but your culture is wrong; I know it's a great source of shame to you, this great FACT, but we won, and you will fail. The dhimmitude will fail, and like the Nazis, the Communists, your failed idea will implode out of negativity.

Do the Muslims not realise that they were allowed into Western Europe as they would do the shitty jobs we didn't want to? It's not that we want their psychotic ideology, but we need them as capitalism's cannon fodder. Look at London.

The Muslim voice may fool the politicians, and the Police, but it doesn't fool me, nor anyone I know. We know the hidden agenda. The Islamification of the entire world.
I do believe that there is a long-term Western Civilisation strategy. The funding of Israel, plus, the rapid takeover of Iraq and Afghanistan (not to mention the soon Regime-Changed Iran) shows the globe that Western Values are in charge.

If there is a MASSIVE Muslim outrage - say a nuclear detonation by terrorists, then the final act has begun, the curtain will fall, and the contingency plan will be to practice massive annihilation of Muslim leadership, plus a return to colonial mindsets, and anyone protesting in the streets calling for cartoonists to be beheaded will be 'disposed of'.

Dark, I know, but as Salman Rushdie noted, most of the Koran was dictated to the paedophile Mohammed from Satan...Hence the fatwah on poor Rushdie...We are fighting the embodiment of pathological psychology on a massive scale.

All we have to do, as Western Civilians, is keep our heads above the mass insanity. Drink beer, eat Danish pork, wear bikinis, say whatever the fuck you want outside a mosque.

Where was Tom Tancredo when this happened? That's my question. I'm sure he opposed it, but I haven't looked it up yet. I'll just call his office and bug them some more. It's becoming one of my hobbies.

If you are an American, you can just rot in hell! But come on over people, we'll take good care of you.