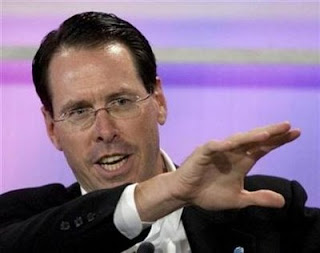 Randall Stephenson squats and unloads an obnoxious and slanderous indictment of American workers. Apparently, he considers those people he's been hiring in India and the Phillipines

(you know, the ones who never have a conversation with you, they just read a script, and start over everytime you ask them a question, you know, those people)

are - get this - more qualified than Americans. He says he can't find skilled American workers.

Indeed, he proclaims that American workers are "defective."

Several years back, I swore a solemn oath to God I would never ever use AT&T again for anything. Now, I am swearing that I'm going to tell everyone I ever meet not to use AT&T.

Randall Stephenson is the corporate equivalent of Leona Helmsley. I can't wait for the day when rabble like us grab this guy, and tar and feather him in the street.

Here's the article from Reuters:


SAN ANTONIO, Texas (Reuters) - The head of the top U.S. phone company AT&T Inc (T.N) said on Wednesday it was having trouble finding enough skilled workers to fill all the 5,000 customer service jobs it promised to return to the United States from India.


"We're having trouble finding the numbers that we need with the skills that are required to do these jobs," AT&T Chief Executive Randall Stephenson told a business group in San Antonio, where the company's headquarters is located.

So far, only around 1,400 jobs have been returned to the United States of 5,000, a target it set in 2006, the company said, adding that it maintains the target.

Stephenson said he is especially distressed that in some communities and among certain groups, the high school drop out rate is as high as 50 percent. The United States needed to make solving that problem a priority, he said.

"If I had a business that half the product we turned out was defective or you couldn't put into the marketplace, I would shut that business down," he said.

Gone are the days, he said, when AT&T and other U.S. companies had to hire locally.

"We're able to do new product engineering in Bangalore as easily as we're able to do it in Austin, Texas," he said, referring to the Indian city where many international companies have outsourced technical and customer support workers.

"I know you don't like hearing that, but that's the way it is."


Well, Randall, I know you're not going to like hearing this, but the days are fast approaching when guys like you will no longer be safe in your homes.

How long do you think Americans are going to put up with the likes of you, Randall? By the way, Randall, you may have noticed that people are moving to this country from all over the world, to give their children the chance to be educated here, and to grow up in this incredible system.

The truth is, America possesses the best educated workforce in the world. Randall is simply spouting an ill-conceived insult as an excuse for his ungrateful corporate behavior. He is angry that Americans are finally demanding that American corporations employ American people. So, instead of accepting this as part of the deal of benefiting from the American system, Randall has decided to insult the American workforce.

Randall is guilty of a stunning lack of gratitude for the blessings America (that would be the American system and the American people) has afforded him.

His lack of gratitude is not at all dissimilar to the moonbats who stand in the streets holding placards damning America.

Randall is an educated corporate moonbat, who can't imagine that he could possibly be hated for his lack of gratitude. He doesn't understand that his position in the American hierarchy is granted him by the American system, and the work of those under him.

He imagines himself to be a king, but what he doesn't remember is that if the king loses the people, he doesn't have a kingdom.

I don't know what forces he thinks he will call in to protect him from the rabble he so carelessly insults. Good luck, Randall.

Pass it on, everyone. Randall Stephenson is a bad man, and AT&T is a defective corporation.
Posted by Pastorius at 12:49:00 am

Yes and we suffer from a 'malaise' too...from idiots like this.

One can only wonder WHAT HE MAKES as a ratio to his linemen (and ladies)?

He is only telling the truth. The US education system is worsening day-by-day. This is because they are not able to find enough people with the skill they need. And this is because the school are infested by liberals, that are more interested in teaching ideologies and politically correct non-sense than to teach math, science and correct writing and reading.

Epa,
This guy, Randall, is the malaise. I guess I ought to have put on an ugly sweater and sat in a fucking rocker to have given my speech telling you about Randall.

Painlord,
You are half right. We do have bad schools, and people are being educated poorly in many places.

That's not what this guy is saying.

He is saying he can't find enough educated people to fill 5,000 positions.

Do you believe that?

The fact of the matter is SAT scores are higher than ever. Our schools are the pride of the world.

I live in a city which people move to from ALL OVER THE WORLD,

to go to the

We have plenty of well-educated people here in the U.S.

He'd rather pay the Filipino rate.

Are you ok with that?

Are you a Communist?

My questions are only half asked in jest. Do not fall for Randall's line. It is utter bullshit.

These corporations are "Multi-Nationals"...with allegiance to no man or flag. Like the rag & Bone men in Steptoe and Son, these Post-American CEO's view America and Americans and "junk" to be hauled away and sold off.

@pastorius
I'm Italian and I'm pro-US and pro-Israel, but I'm much more pro-liberty.
I'm supported the US from the SS-20 crisis and Libya bombing to this day.
This is a political position that is not easy to keep in Italy.

And not, I'm not communist, because I'm a libertarian, and this also is not a political position that is easy to keep in Italy.

I can believe that they are unable to fill 5.000 positions in a single city. This because they are not looking for workers with low skills, but for worker with high skills. These workers are, probably, already occupied and they will not change their job easily. Also, many of the more skilled people learned how to become lawyers, doctors or other and was not interested in becoming engineers or technicians.
The other point about how much they are paid is interesting. I know that people in India gone from 8.000$ 2004 year to 15.000 years today, so India itself start to outsource to other places. Their pool of technicians are depleting fast and their price advantage is eroding fast.
Why? Because it is not possible to teach to anyone to become an high skilled worker, you need to start with high IQ people and be able to motivate them and teach them the right stuff. And the US school system is doing a poor job in teaching and motivating them.
Sure, you have some of the better school around, but this is a problem of median quality, not if you have the best school.

But returning to the pay point, if they are unwilling to pay enough, I suppose that the workforce have better deals around, so I'm not understanding what is the problem.
Or are you telling that US worker have the [divine?] right to be payed more of other workers, in other countries for the same job done?

Michael,
Funny, I think exactly the same way about Randall.

Painlord,
Since you are living in Italy, you wouldn't have understood the humor inteneded in my questions about whether you are Un-American, or Communist?

There was humor intended.

Anyway, to address your questions:

Do Americans deserve more money because they are Americans? No, but American-based corporations, who make most of their money becausee of the system that exists in America (good schools, good colleges, training highly skilled workers which means that AT&T can innovate and make money throughout the world) have a moral obligation to keep jobs in our country.

So, why, if Americans have to pay more should Americans also be paid less?

But, that's not the central point of my argument. My point is, AT&T makes most of their money off products they sell in America, which are also made by Americans. So, AT&T has an obligation to America.

If the price is determined by the whole rest of the world, then let Americans pay the third world price for intellectual-property-based products.

Better we don't start writing about fruits and vegetables prices, because we produce tomato and much other and the prices paid at the producer are 1/10 of the prices paid from the consumers.

But, I would warn you about thinking the enterprises have these "moral obligations". This only bring to things like Alitalia, IRI and other state owned inefficient enterprises or costly monopolies.

Or the market is free for all, without undue limits or it is not free. Market never promise equality for all, communists, Nazis, islamists and Chavez do it and you know what happened (not offense intended).

I suggest you to read Frederic Bastiat about "what is see and what is not see". http://bastiat.net

Hi Painlord,
Your point is well-taken.

I have Libertarian tendency, although I would not classify myself as a Libertarian. It is obvious to me that we must have a government to do things like build roads, protect our citizenry, and regulate our currency.

The way our system works is a benefit to those who live and work here. When you pay taxes, you are paying for the benefit of living here.

AT&T benefits by being here. If they don't want to pay American labor prices, I think they ought to move the hell out of our country altogether.

Do you think they could compete that way?

I compared Randall Stephenson to a moonbat with a sign condemning America. In a way, he can also be compared to an idiot Jihadi who wants all the benefits of America, but by the rules of Sharia.

The two things don't go together, do they?

Really, AT&T should just leave if they don't want to pay the price in America. Please leave, AT&T. Please.