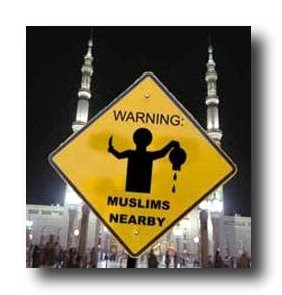 After all, you can't expect them to put up with everything.
From Little Green Footballs:

Muslims are seething in Germany over a planned stage production of Salman Rushdie’s Satanic Verses—the dreaded unreadable novel of blasphemy.

BERLIN (Reuters) - A German Muslim group said on Friday protests were
likely against the first ever staging of a dramatized version of Salman
Rushdie’s controversial book “The Satanic Verses” in Potsdam near Berlin on
Sunday.

Nurhan Soykan, spokeswoman for the central council of Muslims in
Germany, told Reuters Muslims believed in a free press and freedom of
opinion.

“BUT even this has its boundaries,” she said. “We’re worried that
provocations and insults against us have increased recently. I wouldn’t want to
ban (the play) BUT you can bet on protests from Muslim people. They can’t be
expected to put up with everything.”

They're perfectly within their rights to cut off the heads of us Infidels and Jews. And, oh yeah, the Buddhists too.
Posted by Pastorius at 2:54:00 am