Love, Sex, and The Prophet's Life 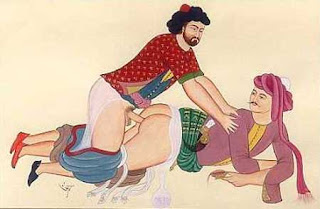 Mohammed used to bang babes, and, some say, the occasional boy. The stories of his sexual exploits were legendary, and they were recorded in the Holy Hadith for all to read.

Some Muslim chick wrote a book on the subject recently, and now a TV station in Egypt is giving out the Publisher's home address on TV.


The continuing controversy over Passant Rashad's book, 'Love and sex in the Prophet's Life,' is symptomatic of the increasing influence of religious institutions over the arts in Egypt.

CAIRO, March 25, 2008 (MENASSAT) – Hamada Emam was shocked when he recently turned on el-Hekma (Wisdom), an Egyptian Islamic TV station, and saw his private address being announced to the public at large.

It wasn't long before the phone started ringing with people accusing him of blasphemy and threatening to kill him.The reason for Emam's outing was that he is the publisher of a controversial book, Love and Sex in the Prophet's Life, by 28-year old Passant Rashad.

The book caused an uproar when it was presented at the Cairo International Book Fair in January; it revisits the way the holy scriptures talk about the importance of sex in Islam and the Prophet's own sex life.

"El-Hekma acted in the most unprofessional way," Emam said. He said the station pretended to be a Christian bookshop interested in ordering 200 copies of Rashad's book.

"They recorded the conversation without my permission and put me on the air. Then they screened my phone number to find out my address and they broadcast it."

Passant Rashad herself has gone into hiding since religious leaders called her an infidel on TV and issued a fatwa calling for the faithful to spill her blood.

"I wanted to explain sex from the real Islamic perspective and to make it the reference for having a healthy sexual life," she said in an interview with Al-Arabiya TV in February. "When I mentioned the Prophet I meant to demonstrate how his relationship with his wives was the perfect example of a healthy sexual life that is devoid of the complications Arabs try to impose on it these days.

"I kept silent, hoping this campaign will end or those sheiks will contact me to discuss the book, but none of that happened. Now I fear for my life," Rashad told Al-Arabiya, adding that she is a devout Muslim herself and she would never insult the Prophet.


I interviewed Ayisha (Mohammed's first wife) on my radio show one time, and she said, "Mohammed's penis smelled like pork."

I don't know what that was about, but she seemed perfectly willing to talk about their sex life, and she clearly felt compfortable with the fact that Mohammed was a man with manly needs.

I interviewed Ayisha (Mohammed's first wife) on my radio show one time, and she said, "Mohammed's dick smelled like pork."

She knew the pork smell???

Ayisha has spent alot of years living in Dar al-Harb.

Obviously Aisha was unfamiliar with pork.

What she smelled was goat shit.

Epa,
I don't want to hear any marinating recipes, ok?

Michael,
Believe me, after the Fu2rman and I got through with her, she knew all about pork.

Peace be upon Pastorius and Fu2rman for enlightening the Prophet's Clitless one!!!!!!!!

Michael,
It must be a pretty desparate situation, if you can't keep up with the needs.

The problem is however, that today, Mohammed is seen by Muslims as the paragon of human virtue, a flawless man who never erred and how everything he said or did should be imitated.

So we see Muslim men marrying very young (pre-pubescent) girls even now in the 20th and 21st Centuries, a prime example of which was Khomeini in Iran who was 28 when he married his 10 year old bride.

Then there is the barbarous violence of Mohammed in war; this man, a self-styled prophet of God who personally beheaded dozens if not hundreds of helpless prisoners of war, which is why today evil, sick and twisted Muslims decapitate helpless kidnap victims in imitation of this blood thirsty bandit.

We are also treated to bizarre imitation such as elderly Muslim men dying their beards with Henna copying Mohammed's obvious vanity.

When you argue that this behaviour is the standard for all time and not a belief for a less civilised age then you end up with a backward looking, medieval, irrational and anti-modern ideology.