The Joy Of Muslima Fashions

Note that the Al Arabiya news article cited below is dated February 28, 2008. Fitna: The Movie (a working link at the time of this posting) cannot be blamed for the outburst of "Islamophobia."

Via this posting at Sons of Apes and Pigs:

A Dutch Muslim woman was thrown out of a public swimming pool for wearing an Islamic-style swimsuit, sparking a row between pool and municipality officials, German news agency DPA reported on Wednesday.

The woman, a convert to Islam, was wearing a "burkini" -- a combination of burqa (the garment Muslim women wear to cover the whole body) and bikini.

She was asked to leave Hanzebad swimming pool in the eastern Netherlands city of Zwolle, some 120 kilometers from the capital Amsterdam.

The municipality says the pool should allow women to wear the burkini, but pool officials said it does not meet regulations and might "scare off" other visitors, DPA reported.

The pool manager said there are special hours set aside for conservative Muslim women and added that the Dutch lady chose to swim outside ladies hours to make a statement.

Discussions are still underway between pool and municipality officials to resolve the matter, the German news agency said.

What is there to discuss? Special hours have been set aside for Muslim women, and they're still not satisfied? Oh, my mistake. She wanted "to make a statement." And just what might that statement be?

But Muslimah "fashions" are not only for the swimming pool and for making statements. Indeed, according to this story at ABC News, burqa makeovers are for both Muslims and non-Muslims:

The burqa is the wardrobe of choice for many Muslim women. It is worn over a woman's daily clothing, usually covering her from head to toe. Today, the burqa has gone designer, popping up on fashion runways in the West, like at this show by Norwegian designers Marked Moskva in Norway earlier this month....The designers reportedly say they are aiming their collection at Muslims and non-Muslims.

Garbed from head to toe, complete with combat boots:

Something more colorful and sporting some arm: 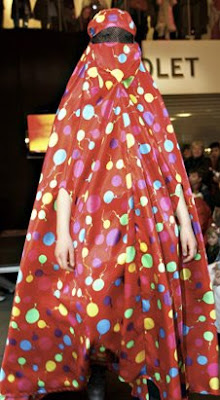 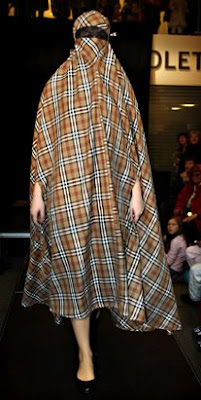 Show more leg but likely not Islamic, at least for streetwear: 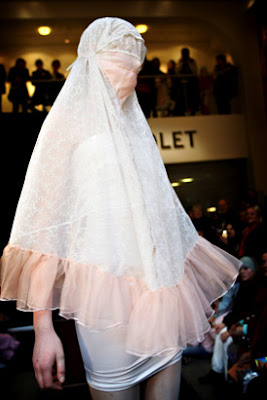 So, Ladies, are you going to rush out and buy some of the latest fashions? Gentlemen, don't you just love those new fashions?

I know that, for my part, I can't wait to don the garments of submission. Yeah, right.
Posted by Always On Watch at 1:31:00 pm

Islam is not a race, my friend. It's a religion. Religions are centers of power in society, just like government and the media. As centers of power, it is necessary that we must be able to criticize these three institutions, or their power will be unchecked.

It may not be enjoyable to you, but it is the Western way.