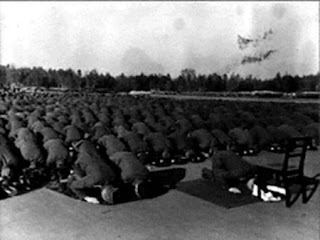 Definition: An Infidel Muslim is an Infidel who acts according to the rituals and laws of Islam, though he doesn't believe in them.
This is from Michael Travis the Infidel Instigator:

The situation vis-a-vis the Fitna film should send a very significant message to Infidels everywhere. Without firing a single shot, taking even one hostage, or hijacking an airliner, the Islamic world has [once again] brought the West to their knees, asses in the air, in submission to the almighty Ummah.
The cretins who represent the MainStreamMedia® continue to ask the question; "Why haven't we suffered another major attack in the years after 9-11?".....the answer is obvious, the forces of Islam don't have to use force when threats and intimidation will achieve the same result.
The brain-laundered populations of the "West" have been made weak and impotent by a never ending barrage of politically correct, defeatist propaganda, spewed from our politicians, church leaders, and the all powerful "media personalities" such as Oprah, Dr.Phil, and the neo-cons who infest the radio waves.
While our enemies prepare for the final conquest, our attention has been diverted by a delusional quest to find the "moderate Muslim". (Diogenes never found his "honest man"....and there are no "moderate Muslims"......that would be apostate...and would result in hanging or beheading).
Most of my family died in the Holocaust, fools who refused to recognise the absolute evil of the Third Reich. We said "never again", but those were just words, and words are cheap. Action is what is required, and unfortunately most Westerners lack the spine and testicles needed to take any action in defence of their Nation, Faith, and Culture.
Geert Wilders is being portrayed as a "Right winger" bent on incitement, as if freedom of expression and defence of one's nation and culture were akin to neo-Nazism. If that is true, then America's founders were a buch of Nazis also.
Posted by Pastorius at 2:36:00 pm