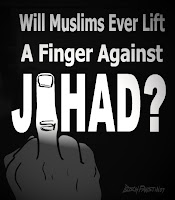 Who would you want on your side if gang members from the religion of peace surrounded you in a dead end alleyway?
A ‘Moderate’ Muslim?

The same people who tell us that Islam is a religion of peace tell us that Muslims are ‘our greatest allies’ against jihad. That there exists a world of evidence proving both of these assumptions to be empirically false hasn’t yet mattered to those in Washington P.C.
To call Washington’s refusal to know what makes the enemy tick a dereliction of duty is an understatement.
In a sane world, after suffering through George ‘Islam means peace’ Bush’s quarter-assed response to jihad, the current crop of candidates would be publicly quizzed about their knowledge of Islam and the Enemy as being a clear prerequisite to becoming commander in chief.

As to ‘our greatest allies’: Muslims has proven themselves to be mere sheep to their jihadist wolves. While we never hear a peep from Muslims when Infidels are murdered by one of their own, they get jolted from their moral coma only when Islam is slighted by a non-Muslim. And they run to Islam’s rescue as if it were a damsel in distress Muslim brother in distress. They have shown themselves to be not only irrelevant against Jihad, but also sympathetic towards it. It’s something we’re going to have to come to grips with and that they’re going to have to answer for. Muslims as a group are not on our side and, according to Islam, shouldn’t be on our side in any context. I’m speaking mainly about the Muslim Collective, the submitted Muslims who aren't quite jihadists, but sure as hell are not rooting against Jihad either. Which brings me to a great quote from George Orwell that is relevant here, even though it’s about pacifism in wartime, 1942:

"Pacifism is objectively pro-Fascist. This is elementary common sense. If you hamper the war effort of one side you automatically help out that of the other. Nor is there any real way of remaining outside such a war as the present one. In practice, 'he that is not with me is against me.' "

[The next two paragraphs are a continuation of Orwell’s line of thought, published 9/26/01 and written by Michael Kelly, the first journalist to be killed in Iraq in April 2003]

To further make this important point: Muslim’s haven’t done anything against Jihad and they sure as hell don’t want us to do anything against their 'sacred' Jihad, objectively making them on the side of Jihadists. If Muslims aren’t for the defeat of Jihad, then they’re objectively for its victory and will not lift a finger to challenge it. They need not necessarily act against us to be against us, since some Muslims simply aren’t built to be jihadists, but instead are meant to stand by passively as the Jihad has its way with the world.
The only way we can fully defend ourselves and give Muslims an incentive to proactively reject Jihad is to ruthlessly crush it and bury it once and for all, whatever it takes. In doing so, 'moderate' Muslims will magically pop up all over the world, glad to be alive and having avoided the fate of the jihadists. It’s a start.
Only when the enemy is crushed will the non-Mohammed Muslims be able to take the stage of Islam that the jihadists owned for a thousand years. Then Muslims will be given a chance to join the civilized world and begin making the case for a pacified Islam, or scrap the whole mess entirely. Islam’s fate will be up to them at that point, unless they pull a jihad revival, and then it’ll up to us, because we cannot allow ourselves to be at the mercy of an enemy for whom Nukes are the answer.

Moderate muslims, to me, are those whose consciences reel at the thought of being of the same religion as these killers of AL Qaeda, HAMAS, Hizballah, and the Basij and Pasdaran (IRGC types). However, they also know what the religion says, what the Quran mandates, what the hadiths insist were the traditions of Muhammad. They may not be regular mosque goers, especially here.

I believe they cannot rectify their conscience against the ascendant form of Islam, and know what fate awaits those who pop up against this tide internally.

In other words, they, en masse, will be useless in this war until the moment passes when the winner is predictable. I understand this. I actually don't hold this against them. The number who do stand up, will probably be proportional to the number of those who stood up internally against the nazis, or the communists in Russia.

IOW, the Righteous of conscience are few.

Muslims have not shown themselves to be interested in fighting against the Jihadis in their midst.

The truth is, there are no moderate Muslim political organizations, academic institutions, governments, or media outlets, of any appreciable size, anywhere in the world.

If there were sizable numbers of Muslims who opposed Jihad, then there would be organizations to represent them.

Right, if Muslims at large were ever going to condemn jihad and defend the civilized world in word or deed, it would have been after 9/11. After seeing our pathetic response to the atrocity, they've played this wait and see game. Nearly seven years later, there are still some of us pretending that they will step up. This forlorn hope has dangerous consequences when held by those charged to protect us, as it makes them refrain from saying and doing what must be said and done against Jihad. We're on our own here. Most Muslims, in their unforgivable nuetrality, silence and inaction, have Objectively sided with Islam and its Jihad.