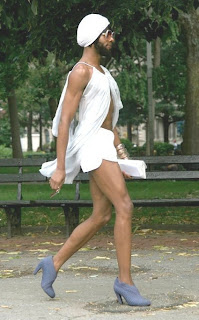 The Muslim scholar said it, not me. All I can do is laugh.
From Sugiero:

Fatwas coming your way!:
Moderate Muslim scholars said there were no reasons to reject homosexuals under Islam, and that the condemnation of homosexuals and homosexuality by mainstream ulema and many other Muslims was based on narrow-minded interpretations of Islamic teachings.
In the article Muslim scholar Siti Musdah Mulia actually said that Allah created homosexuality:
Musdah said homosexuality was from God and should be considered natural, adding it was not pushed only by passion.

Go read the whole thing over at Sugiero.
Posted by Pastorius at 6:24:00 pm