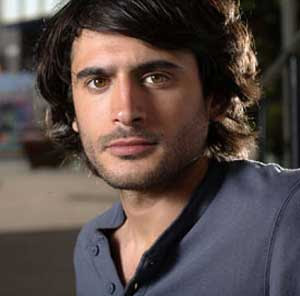 Syed - gay as the pe ... , ahem, day is long
Welcome to the land of the Infidel, my Jihadi friends. A land of endless bombast, blasphemy, fun and freedom. I know you don't like it, but you can, you know, do the gay thing and shove it up your ass.
From Pink News:

EastEnders is to screen a storyline involving a Muslim character who has a gay affair.

New character Syed Masood, a Muslim property developer who has a girlfriend, is to fall for openly gay Christian Clarke.

The couple will be shown kissing and 24-year-old Masood, played by Marc Elliott, finds his "religion and sexual feelings in conflict". But the Muslim Public Affairs Committee say that the BBC should have a "normal friendly Muslim character."

Last year, the BBC received more than 150 complaints over a gay kiss between Christian and Lee Thompson which was shown before the 9pm watershed.

"This isn't a moral tale of right or wrong; it's very much a human interest story where a young man struggles with the conflict between his faith and his feelings.

"To all intents and purposes, Syed's a 'good' Muslim man: he doesn't drink, smoke or engage in sex before marriage. But he struggles with his sexuality when he finds himself drawn to Christian and he believes this goes against his faith.

"This is not a story about Syed and Christian's physical relationship – we don't see anything beyond one kiss. It's more about the inner turmoil and conflict Syed endures trying to remain true to his faith while questioning his sexuality.

"Syed has already been ostracised from his family and community once and if he's true to his heart he risks losing his family again."

But Asghar Bokhari of the Muslim Public Affairs Committee said: "The Muslim community deserves a character that represents them to the wider public because Islamophobia is so great right now.

"There's a lack of understanding of Muslims already and I think EastEnders really lost an opportunity to present a normal friendly Muslim character to the British public."

A survey published last month showed that UK Muslims have significantly less tolerance for homosexuality than their French and German counterparts.

The poll, part of the the Gallup Coexist Index 2009, found that not one of the 1,001 British Muslims interviewed believed homosexual acts were morally acceptable.

Isn't it great that the Muslim character, Syed, is in love with a man named "Christian"?

That is LOL funny.

The Muslim Public Affairs Community UK response to this is hilarious also. They want a more sympathetic character because they are afraid a gay character will stoke the "Islamophobia" boogeyman. Instead, if the MPCUK understood anything about public relations, they would understand that this Syed character is actually a leftist attempt to humanize Muslims.

But, of course, the MPCUK is not really interested in public relations as anything more than a ploy they use to promote Sharia law in the United Kingdom.

One question is, will the network cave? If this was a gay christian character and a right wing christian group protested, its unlikely anything would come of it. This is largely because of the stealth jihad combined with the fear of being killed by Muslim fanatics. If MPCUK does get them to change the story line to avoid offending Muslims, what effect will it have on the gay community as well as supporters of gay rights? On the whole it might not be much, but ironically it may lead some of them to question those who claim to champion their ideals and maybe even question the concept of Islamophobia.

I think Andy Armitage (fellow IBA bloggger and writer for the Pink Triangle) once wrote that gays seem to be generally more aware of the Jihad threat than straights. But, he lives in the UK.

Here in the U.S. I think it is the opposite.

Imagine Muslim riots in front of the BBC.

Hey, I thought of a video you need to see:

Never heard of them but the sound is great.

Indeed "Oh my genitals" is exactly what the BBC will feel when their fluffy unicorn lefty mentality will clash with the mentality of the average Mo supporter, lol.

Andre,
The Suburban Lawns were a Southern California phenomenon. Their album went gold without any airplay outside of KROQ Los Angeles.

That is a friggin' amazing amount of records to have sold in one limited area of about 15 million people.

That means that about 1 in 30 Southern Californians bought that friggin album, if I am not mistaken.

However, their appeal was so limited that you can not even find their allbums anymore. No CD releases or anything.

They seem to have disappeared off the face of the Earth.

The lead singer is named Sue Tissue. She was from right around my hometown. I thought I saw her in a restaurant about a month ago, but I was too intimidated to go up and talk to her.

Anyway, I did have the pleasure of seeing them in a small club back in 1983.

Too bad they weren't British, they'd feel like home among the British punk bands in the era and defo sign a contract or more.

I'll do a search and see what I can find about them, the sound is great and this is what I listen mostly these days.

I've loved this song since way back then. They have an album out, which I'm pretty sure you can download on the internet, but there are no pay sites, so you have to use file sharing stuff. You can also download this song.

This song was on the album, as I remember, and there were three or four other songs that I liked.

Gidget Goes To Hell was never on an album. However, you can also find that one on line as well.

BBC offers £30,000 and an apology for Question Time 'slur' on Islamic leaders over anti-war protest