Oops, Kim Jong-IL Did It Again! 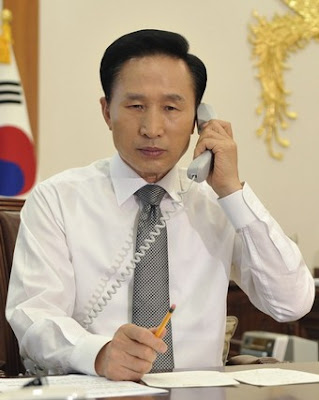 South Korean President Lee Myung-Bak talks with his US counterpart Barack Obama on the phone at the presidential Blue House in Seoul on May 26, 2009. South Korea joined a US-led drive to curb trade in weapons of mass destruction following North Koreas second nuclear test -- a move which Pyongyang has said would be tantamount to a declaration of war. (Sky News-AFP/Getty Images) 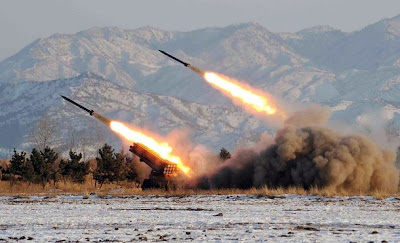 North Korea has launched its sixth missile since testing a nuclear weapon this week, a South Korean presidential official has said.

The short-range missile has been fired from North Korea's east coast into the Sea of Japan, the official told Yonhap news agency.

The communist state shot up three short-range ground-to-air missiles from locations near its east coast on Monday, the same day it conducted an underground nuclear test that shocked the world.

The missiles fired in the last two days are said to have a range of 80 miles.

Several times in recent years, the North has test-fired short-range missiles into either the Yellow Sea or the Sea of Japan.

The exercises are often staged to coincide with periods of regional tension.

The United Nations Security Council has said it needs "some time" to finalise a resolution sanctioning North Korea for its latest nuclear and ballistic missile tests.

The announcement was made by US ambassador to the UN Susan Rice following the council's meeting between Britain, China, France, Russia, the US, Japan and South Korea.

On Monday, the council unanimously condemned North Korea for its nuclear test.

The resolution forbids the reclusive regime from conducting any future nuclear tests or missile launches.

There is a headline on Fox News that the Norks have stated that the armistice is over and that S.Korea's intention to join in the Anti-Proliferation regime is tantamount to a declaration of war on N.K.

MR, that Britney was for you, LOL

It has some rock components into the song, LOL