The Muslim community turned on extremists in their midst yesterday, telling them they were 'sick and tired' of their behaviour.

The latest violence erupted as arguments raged between fellow Muslims shortly after Friday morning prayers in the Bury Park area of the town. 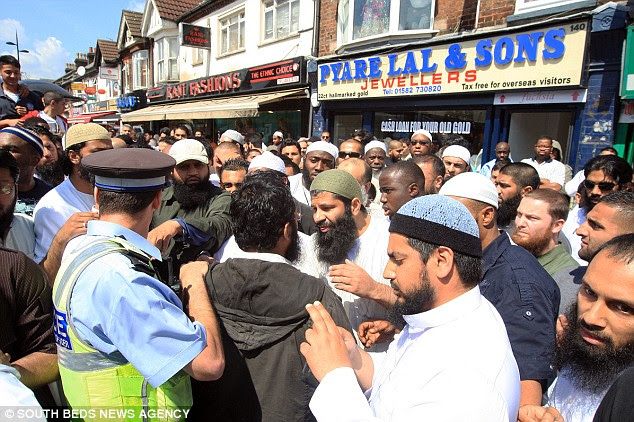 Heated: The two groups clash after members of the Luton Muslim community decided to move a group of extremists on, with officers struggling to hold them back

Passing traffic ground to a halt as the large group of moderates confronted about a dozen extremists.

As the radical Muslims began to set up their stall, they were surrounded by a crowd shouting 'we don't want you here' and 'move on, move on'.

Angry words were exchanged and scuffles broke out between members of both groups, with the extremists shouting 'Shame on you' and 'Get back to your synagogue'.

The moderates chanted 'Out, Out, Out', and after an uneasy stand-off, police officers were able to persuade the extremist group to leave the area. 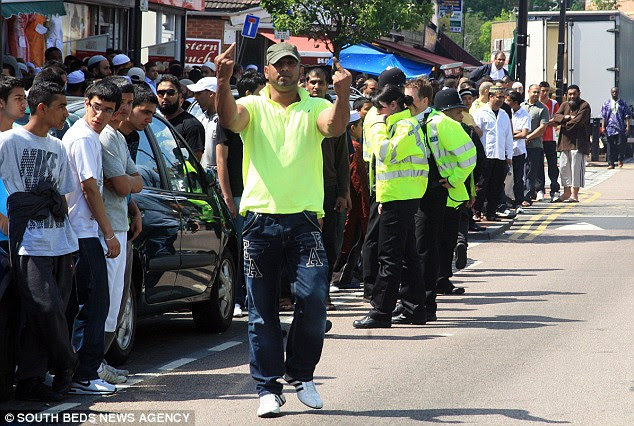 Anger: A member of one of the groups gestures to the camera during the confrontation

Buses and cars were unable to move as the crowd spilled into the road.

Farasat Latif, of the Islamic Centre in Luton, which was firebombed after the protest against the soldiers, said moderate members of his community took action because police had failed to move the group on.

During the protest against the homecoming parade of the Royal Anglian regiment in March, the extremists had shouted 'baby killers' and 'butchers of Basra' as well as brandishing placards against the Iraq war.

He said the extremists, who follow the militant group led by Sheikh Omar Bakri Muhammed, had fuelled feelings against the Muslim community which led to a march last Sunday in Luton which was disrupted by white, right-wing extremists. 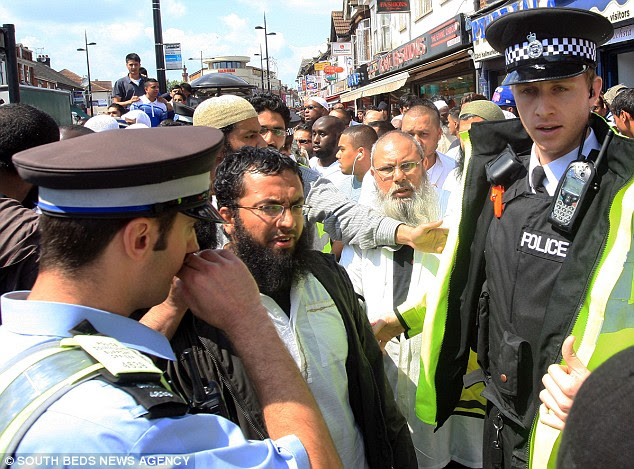 Standstill: The clashes between the two groups caused traffic to stop through the Bury Park area of Luton

Mr Latif said: 'We have been fighting these Muslim extremists for you. They represent nobody but themselves.

'The community decided to move them on because the police won't. We have asked them, but they did nothing.

'I don't know if they will be back. We have been the victims twice over - from the stupidity of Muslim extremists who metaphorically pour petrol and fan the flames of the right-wing extremists.

'This was a peaceful demonstration and we hope they get the message that the law-abiding community is sick and tired of them.'

No one was arrested during the incident.

A spokeswoman for Bedfordshire Police said: 'We attended the incident, calmed people down and moved them on. No one was arrested and there were no injuries.' 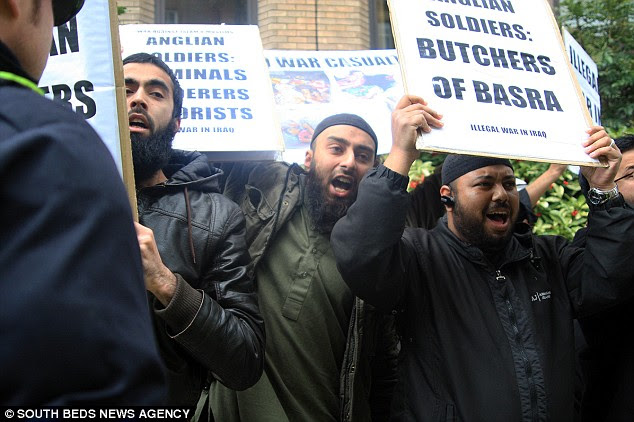 Flashback: The extremist group is said to be behind a protest against the homecoming parade of the Royal Anglian regiment in the town in March

UPDATE: Up Pompeii calls this a "clash of Muslim strategies". They may be right.
Posted by Pastorius at 10:54:00 pm

Labels: Muslims in the UK, UK

Better late than never. This is exactly what they need to do.

It's only been eight years, huh?

This is great news. Hope there is more.

This article supports my personal view that there are "moderate Muslims."

The problem with the immigration of moderate muslims is that their children could be radicalized. The more of them there are, the greater the odds.

But, to stop this we need to legally prohibit the funding of radical mosques by foreign governments. We also need to be fair to moderate muslims. Nothing feeds radicalization like the impression of unjust oppression.

We, in short, need to stop Islamic immigration; stop Saudi mosque building projects; and only employ culturist profiling when there is probable cause.

I'm guessing Anonymous does not believe the moderates are sincere.