My grandmother has always told my daughters, even to this day, the first time you marry for money, the second time for love.

I've never been too sure how much she was kidding. . .

But clearly, Archie has taken her advice. The dumbass. Would have been so much happier with Betty. But does anyone ask the advice of Midnight Rider? Nooooo. . .

After 68 years, comics teen makes his choice — but many think it’s wrong

After 68 years of waffling, Archie Andrews has made his choice. It’s the raven-haired heiress over the girl next door, Veronica Lodge over Betty Cooper.

Just eight days after Archie Comics announced that Archie would finally choose between his two high-school hotties, the word is out: Archie gets down on bended knee to present Veronica with his proposal and a ring while poor Betty looks on and wipes away a tear. Veronica replies to the proposal with a resounding, “Yes!”

The red-haired all-American boy’s choice is likely to upset many Archie fans. Ever since news that Archie would get married broke, they have been filling the message boards at ArchieComics.com with their opinions on which girl should get the ring.

It’s not even close. A strong majority feel wholesome Betty should get the nod over snooty Veronica. 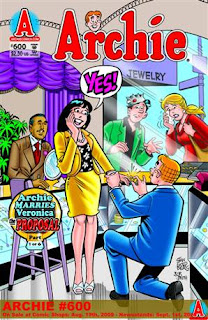 Not the people’s choice

“I hope it's Betty! I've read these comics for over 30 years and waited for the day he woke up and chose Betty,” wrote fan Rachel.

“I think he should ask Betty,” agreed reader Rob. “Veronica is too sophisticated and too richy rich for him. Betty is very laid back, sort of like the All American Girl she has always been. Betty has a big heart, she would make a great wife to Arch, and I would be disappointed if Archie chose Veronica! Good luck to Archie.”

Among the minority who felt Veronica was the obvious choice was “archielover,” who wrote: “OMG! Pick Veronica! He doesn't deserve Betty, he always makes her do all his chores and fix his car and help with his homework, while he treats Veronica like a little princess! I can't wait to see what happens :)”

But mind you, Issue 600 will deal only with the engagement. Whether Archie and Veronica actually get hitched as the story plays out over several issues remains to be seen. Given Archie’s history of indecision, would it be unreasonable to assume that there are more plot twists ahead?

The news that Archie would get married leaked out on May 20 on the Internet and then in the official source of all things relating to celebrity gossip: the New York Post, which ran the shocking story under the headline: “BETTY OR VERONICA? ASK ARCH”

Archie Comics’ official blog confirmed the epochal news, digging into its cache of exclamation marks to declare: “ARCHIE ANDREWS IS GETTING MARRIED!”

The blog continued: “The eternal love triangle is the cornerstone of Archie Comics for over 65 years — and the bane of Archie Andrews' existence! In fact, over the years it has not only defined the Betty/Archie/Veronica relationship, but has even threatened to dismantle it a time or 20.”

According to the blog, the six-part story of Archie’s long-delayed passage into adulthood will begin in Issue 600 of his eponymous comic book “Archie.” It will ship on Aug. 12 and be available in comics shops on Sept. 8.

In the story, Archie has finally graduated from Riverdale High School; in fact, he’s five years older and a college graduate. He may even have — gasp! — an actual job when he gets engaged.

But who’s going to be best man? It can’t possibly be that wiseacre Reggie, can it? Our money is on Jughead, who still can’t lose that goofy hat he’s been wearing since Bob Montana first drew it on his tousled head way back in 1941.

OK, I confess I haven't kept up with this, but I smell a switcheroo in the making. I always assumed Archie would end up with Betty and Veronica with that Reggie guy. Unless they are planning an "Archie's Divorce" issue a couple years down the road I bet they are really thinking the same thing.

I haven't kept up either. But knew it was in the works, saw it today and thought it a good diversion, especially by adding the cheesy song at the end :)