Laker-Blogging: Can Kobe Be Dennis Rodman? 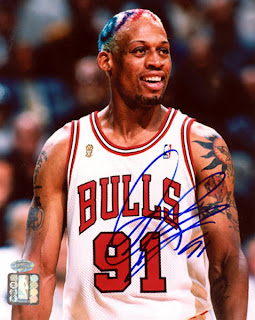 I know this has nothing to do with the subject matter of IBA, but if Roger Simon can do it, then I can too.
Sadly, though I had never thought so before, I have become convinced that the Lakers are in real trouble. The popular wisdom is that the Cavs would have been the harder matchup. But, I've been thinking about this, and I have come to agree, in a limited way, with Charles Barkley, who last night predicted the Magic in Seven, that the Magic present an almost impossible matchup for the Lakers.
DWIGHT FREAKING HOWARD.
I've always thought of Howard as a mini-Shaq. But last night, Howard proved that he is not Mini-Shaq, but is instead, Shaquille O'Neal if Shaq could have actually applied himself to a weight-training program.
That is to say, Dwight Howard who stands 6-11, about 280, is smaller than Shaq, but he is as powerful, and far quicker than even Shaq in his hey-day.
The Lakers are, as I said, in real trouble.
The Lakers had people they could throw at Lebron. They could throw Kobe/Lamar/Sasha/Josh Powell/Luke Walton at Lebron. That's 25 fouls before anyone fouled out..
But, who do they have to throw at Dwight Howard?
Bynum who is picking up fouls at the rate of one per four minutes?
No friggin' way.
Gasol?!?!!?
In my opinion Gasol can NOT guard Dwight Howard.
Howard is just too good. He is a man who has now proven he can carry an entire team. He may have averaged only 20 points per game during the season, but he is capable of scoring at will. He scored 40 last night.
Howard is so freaking quick, and powerful. He's gonna make Bynum cry and snivel. And, he'll make Gasol start hyperventilating in Spanish, til he sounds like Ricky Ricardo having a temper tantrum cuz Lucy spent too much money.
In fact, if Jackson doesn't handle Bynum well, Howard could destroy Bynum the way those missed free throws destroyed Nick Anderson's career.
But, I digress. I've been trying to figure out what the Lakers can do to stop Howard. Quick answer; Bynum has to stay out of foul trouble.
Basically, I think Jackson/Rambis have to tell Bynum to anchor himself outside the circle and the Lakers have to throw double teams, with a soft triple, on Howard everytime he posts up. The second he gets into the paint, the Lakers have to go hard triple on him. Once again, with Bynum anchored and not moving his feet. The other two Lakers have to be responsible for actually guarding Howard, because Bynum can not be trusted. Bynum has to function solely as a monolith between Howard and the basket.
The reason Bynum keeps getting into foul trouble is because he keeps moving his feet, even after the guy he's guarding commits to a path to the basket. And, half the time, Bynum follows the guy into the cirlce before he plants himself.
Bynum simply can not read commitment vs. fake.
That won't work a second against Howard, who as I noted, is as quick as Shaq in his hey-day.
And, this brings me to the point of this post. The secret weapon Phil Jackson could pull out.
The only guy who was ever able to guard Shaq was Dennis Rodman. Very counter-intuitive considering Rodman was 6-8, 230.
Kobe is about the same size as Rodman, and Kobe is as smart as Rodman (Did I hear someone say "Smarter"? NEVER UNDERESTIMATE THE WORM). Rodman's talent was that he could get into Shaq's head, and he was strong for a relatively thin man.
Kobe could do this.
Kobe may have to guard Howard.
What Rodman did was get underneath Shaq, and unsettle him, throwing him off-balance, and which meant Shaq got pissed off.
But, you know what? Shaq was easy to piss off. I don't think Howard is as weak-minded as Shaq.
We'll see. I wouldn't be surprised if Jackson pulls this out. He was the one who put Rodman on Shaq, wasn't he?
But, here's the rub, Howard is not typically a big scorer. He will have to be for the Magic to win. I think he will have to score 30-35 a game. If Howard does this, the Lakers lose.
Posted by Pastorius at 4:27:00 pm

Jaco, wow, going off the reservation!

I am not saying it is impossible for the Magic to win, however, if the Lakers bring their A game, like in Game 5 and 6, the Lakers will prevail.

I concur that Gasol and Odom have to step up, mabye even throw Mbenga at him with his 6 fouls but I see Kobe counter acting Howard.

This is not, like Van Gundy said, the Celtics of '08 with three Hall of Famers.

Howard's supporting cast must step up, and that will be the key.

Lakers Ariza will play a prominent role in this series.

Don't believe the 0-2 hype from the regular season.

You know what? I didn't think of Ariza. Ariza could also, conceivably, pull a Rodman on Howard.

Thing is, notice that I said their are two ways of handling Howard;

1) double-team him, with a soft triple-team,

I think the Lakers should do both. That will actually throw him off even more. He'll never be sure any particular time down the court, what will be coming at him.

I'm not really going off the reservation here. You must agree with me that Odom, Bynum, and Gasol are ill-suited to deal with Howard.

Or, do you disagree.

I'm really unhappy with Bynum. He's starting to remind me of guys like Nick Van Exel (who I loved, but we have to admit the dude was, ultimately, not a winner).

But, on the other hand, I do hold out hope that Bynum could turn it around. He certainly is capable of doing it. He is, talent-wise, the second best center in the NBA.

If he sees Howard as a career-defining challenge, then we could see him come out of his shell.

By the way, the problem I mention with his defense is not something he is stuck in. He has the quick feet to be a much better defender. Heck, there have been times when his defense was even better than his offense.

And, the Lakers looked the best they looked all year against Denver in the last two games. If Lamar Odom shows up, Gasol is aggressive, and Ariza plays like he has been, we will win!!

PS Kobe is a real patriot! During the Olympics he spoke lots about how proud he was to be an American and play for the USA. An announcer asked if patriotism wasn't hokey! Kobe, "Not to me."

Culturist John,
Your points are well-taken, and it is great that Kobe is a patriot. I'm writing here as a big fan who has a big fear, based upon having had to watch the Lakers turn the idiot Chris Anderson into a star. The guy is not a good player, but the Lakers made him look like he was freaking Chris Bosh.

Pastorius (and I hope Carlos),

Culturist John,
Join the fun over at Carlos' blog. He writes on the Lakers almost every day.