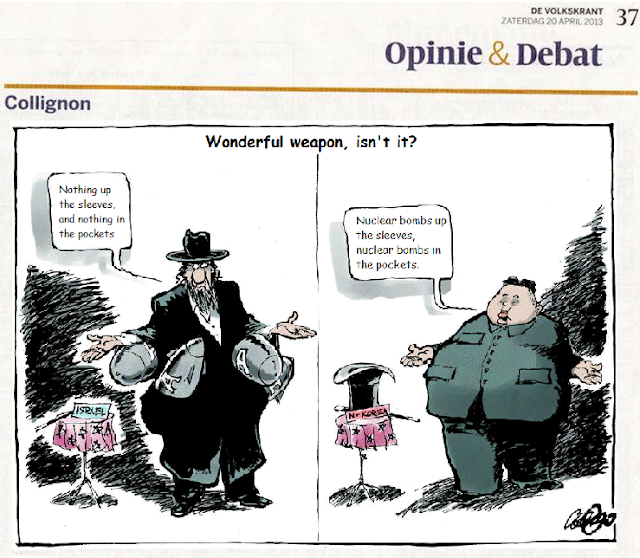 Dutch cartoonist channels 'Der Sturmer' in Characterization of Israel as Hassidic Jew in De Volkskrant.HT: TundraTabloids. Needless to say, that Israel is depicted here as an ultra-Orthodox Jew like the Nazis did during the 20′s-30′-40′s. This is part of the demonization regardless if Colignon admits to it or not, drawing on ancient stereotypes of Jews, and transposing it to modern day Israel. The cartoonist Jos Colignon has published other anti-Israel cartoons as well.

The Dutch newspaper De Volkskrant published on April 20, 2013 a controversial political cartoon by the Dutchman Jos Collignon (1950), who since 1980 has been three times a week a regular cartoonist for the newspaper. Israel and North Korea are unfairly compared with each other about nuclear weapons.

But that’s not even the most disturbing design of this cartoon. The way in which Jos Collignon depicts Israel is reminiscent of the period of Nazi Germany when Julius Streicher made similar cartoons in the antisemitic publication of Der Sturmer, a favorite magazine ​​of the European anti-Semites.

For Collignon, like Streicher, the Israeli is a Hasidic Jew, a secret sneak, presented with crooked nose, long beard in typical 19th century dress with black hat and long black clothes. It is high time that Collignon visits Israel, if only to see how the average contemporary Israeli looks like today, an idea. 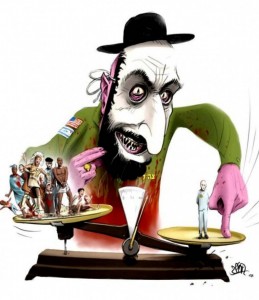 Last month another like minded antisemitic cartoon was put on a political poster fro the PS (Belgian French Socialist party) and PAC. 'Jew hatred' is back in fashion on the low lands, both in the North and South.Jodenhaat is terug bon ton in de Lage Landen, so much seems obvious.

Merry Hermanus, ex chairman of the Brussels PS: "We succeeded to defend the underprivileged migrant populations, but we have not passed our values. They have remained a dead letter in a large proportion of migrants. the PS could only convince 8 or 9% of the electorate in Brussels.'We have been taken prisoner'." History has shown us how people from the left can join the Autoritarian Forces.I'm very worried for the PS." Hmmmm.....Degrelle must be applauding from Hell.Read the full story here.
Posted by Pastorius at 6:27:00 pm

Oh yeah that's right. The ever dangerous Hassidic Jew walking around with nukes in his pockets while sipping on the blood of Gentiles. I have seen so many Hassidic Jews do that here in Buenos Aires its not even funny.

Meanwhile the peaceful imams and mosque goers are of course running out into the streets hugging random people and kissing them wherever they can. They also sh*t flowers and walk on water. They are all about peace!