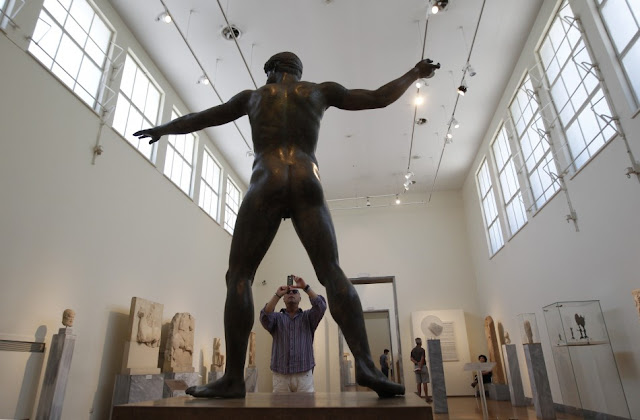 Greece has pulled two ancient statues of nude males from an Olympic exhibition in Doha after Qatari authorities insisted on veiling them.

Greek Deputy Culture Minister Costas Tzavaras, who visited the country last month for the exhibition opening, objected, saying the works should be displayed as they were or shipped home.

So the statues were returned to Athens last week, the official said on condition of anonymity.

The statues date to the 6th and 2nd centuries BC. They were among nearly 600 antiquities brought from Greece for the “Olympics – Past and Present” exhibition.

You have checked my web art site right!?

I have had enough of PC
www.carolmilton.com

Have a great week
carol-christian soldier

Nicoenarg,
I've heard from "those in the know" that Arab men have small penises.

LOL. Well that would explain why Qataris are so scared of a bunch of nude statues!

I wonder what would happen if some of their women "threw" themselves at these statue penises. Do they get punished for adultery? And what happens to the infidel statues? Are they required then to convert to Islam or face death?

I should call the Ministry of Culture of Qatar!

*****After searching on Google*****
I'm going to instead send them an email here: info@moc.gov.qa

Small penises AND oversexed -- must be hell on earth. No wonder Arabs are always irate!

Sent the following email to Qatari Ministry of Culture. WARNING: Contains what some may perceive to be "strong" words.

Dear Imbeciles at the Ministry of Culture of Qatar:

I read about the nude statues from Greece and how you wanted them to be either covered or removed. Greece decided to take them back instead of covering them (those infidels! They still refuse to bow...maybe its because they're naked they don't want to give the wrong impression by bowing?). Anyway, I have some questions for you in the hopes that you would sincerely answer them.

2) Why do you suppose the statue penises aren't erect? Do you think it may be because of the ugliness of your women?

7) Are you aware the statues aren't "real" people? Or are you too infatuated by the nude statues yourself that you can't tell the difference?

8) Finally, WWMD (What Would Mohammed Do) in this situation? Do you think he would ask the statues be covered or removed or do you think he'd "hug" them from behind? The hadiths suggest he'd do the latter...what do you think?

Hope to receive a reply from one of you demented morons soon.

Lets see if they reply.

LOL. I really should be studying but sending that email was way more fun than signals and systems!

I have a final tomorrow in Data Processing. Find that I do better to wait till late at night. After you all go to sleep. :)

Hey AOW,
You know Nico is an Arab, right?

Hopefully, if what AOW says is true, Nico has been gifted a bit more than other Arab men.

Pasto, I am not an Arab. I was born in Saudi Arabia. But come to think of it I do have some Arab blood along with a myriad of other races...

By the way, if what AOW says is true and my Arab genes found their way into my penis...I would hope I am gifted a lot more than "a bit" than other Arab men.

I would have swarn that nearly 100% of the population of Saudi Arabia is Arab.

I knew that Iranians were not Arab. Guess I better do some reading.

Alright. True to Arab culture I shall fight for my penis's honor (and I guess murder it if it brings shame to the family?)!!

Saudi Arabia = 100% Arab and 100% Muslim, but that's only the citizen population. Non citizens are not necessarily Arabs nor are they given the citizenship if one is born there.

Can't believe Pastorius just turned this whole thread into a discussion on my genes and my penis! :P

That's Pastorius for you.

Troublemaker all the way! :D

LOL yeah, and then he disappears.

Can see him there snickering....

Yeah, I am laughing.

But really, I thought Nico was Arab.

Whatever you are, you're an Infidel.

LOL. Its cool. Nico doesn't even know what specific race he belongs to.

I do have distant ancestors from Arabia, and Persia...Greece and Italy. Closer ones came from Uzbekistan, Afghanistan, Northern Pakistan and England. I don't look Caucasian or Arab or black or anything else...I don't know what I am!

You win with entry into the three most important entries.

Number 3, a member of the mutt race. We are one big happy family. :)

You know Nico is an Arab, right?

I guess that I stepped in it. Or would have done so if indeed Nico were an Arab.

Oh, well. You know what else is rumored: "It's not the size of the ship; it's the motion of the ocean."

Seriously now....I've been told by more than one woman who was, at some point, married to an Arab. Each one of them told me the rumor that I mentioned above.