Picture of Michelle Obama visiting Saudi that is on terrorist list 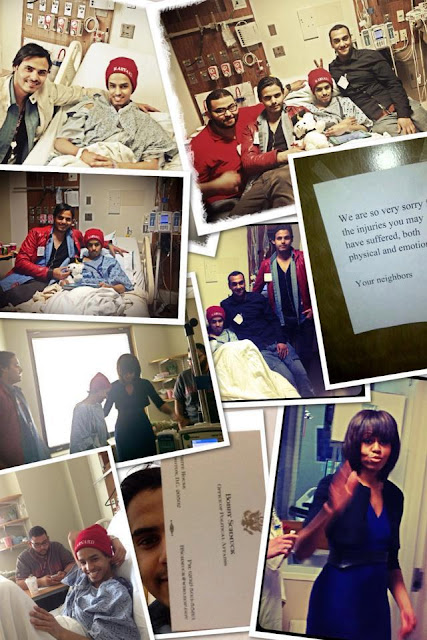 LET ME BE CLEAR: I AM NOT POSTING THIS BECAUSE I BELIEVE IT TO BE ABSOLUTELY TRUE.

I AM POSTING IT PRIMARILY BECAUSE OF THE PHOTOS AND BECAUSE IT IS DOCUMENTATION OF SOMETHING THAT HAPPENED WHICH THE MEDIA IS IGNORING AND WHICH IS GOING TO DISAPPEAR REALLY FUCKING SOON.

IT IS IMPORTANT TO HAVE AROUND FOR FUTURE REFERENCE.


There are TWO (2) detained Saudis after Boston Marathon, according to documents obtained by Glenn Beck.

Look at photos of "Hospital Saudi," the guy tackled then detained in hospital by police 2 hours after Boston Marathon. He was reported to have "severe hand burns" and "shrapnel in back of leg," and "smelled strongly of gunpowder."

BUT when you look at photos of Abudl Al-Harbi, aka "Hospital Saudi" laying in hospital bed, he looks 100% healthy. His hands look fine. He's got an IV with purple plastic endpiece.

Gov't staged "photo op" for al-Harbi with Saudi Foreign Minister inside the hospital room, and both look perfectly healthy.

In other words, al-Harbi (Hospital Saudi), isn't the Saudi that got burned. The OTHER Saudi that we haven't seen, aka Saudi #2, is probably the one burned and shrapnel-injured. But the government isn't staging photo-ops with Saudi #2, are they? No way.

Ask yourself.... WHY would the feds, after screwing up this case royally and allowing 2 Chechens to enter the USA, and ignoring 2 warnings from Russia about the Chechens... WHY would the feds seek more publicity on 2 Saudis they were planning to DEPORT mere days after the bombing, before any investigation?

The only answer is, "The gov't wants to distract from Saudi #2, so they put Saudi #1 in the hospital room and staged a photo op w/Saudi Foreign Minister, THEN RELEASED THE PHOTOS ON THE WEB, hoping that folks would say "Oh look, there's the Saudi in the hospital, that's the Saudi "person of interest" from Day 1 of the bombing, his name's Abdul al-Harbi, and he's not that interesting, so I guess the feds can deport him."

That's the only reason for this "photo op" and photo release.

QUESTION: Can we see a photo of detained Saudi #2 (in custody as reported by Glenn Beck)? I doubt the gov't is rushing to show us Saudi #2. Because if you look at photos of the Marathon, of the "Saudi Trio," one of the trio looks EXACTLY like Bin Laden, aka his son, Hamza Bin Laden.

Hamza, aka "The Crown Prince of Terror," vowed revenge vs the USA, and is known to look "Like a young Osama Bin Laden."

FWIW, Michelle is wearing the same dress she wore to the interfaith service on that Thursday.

It's also the same dress she is wearing in the US press pictures of her visiting the hospitals.

I think the pic of her with him is real.

Pinpointing the time of this visit and comparing it against the timing of the two efforts to run interference for this 'Saudi-student-person-of-interest-#1' with Kerry and then the 'walk by' w/Obama by the Saudi minister.
Napolitano cooked her own goose by initial denials & suggestions that there was another Saudi with an open file that had no relation to the Bostom Marathon 2013 bombing.

This theory seems more probable than AlHarbi being Hamza. Just one note, the guy the green arrow points at does not look exactly like bin Laden. Either the guy drawing the arrow doesn't remember what bin Laden looked like or he thinks all middle easterners look the same.

By the way, if there is another Saudi whose identity has been kept secret then there are at least 3 Saudis at the hospital. One of them is a girl.

This is a nightmare. These discussions seem more the type of exchanges people in third world countries have in secrecy, rather than being in the US. Terrifying!